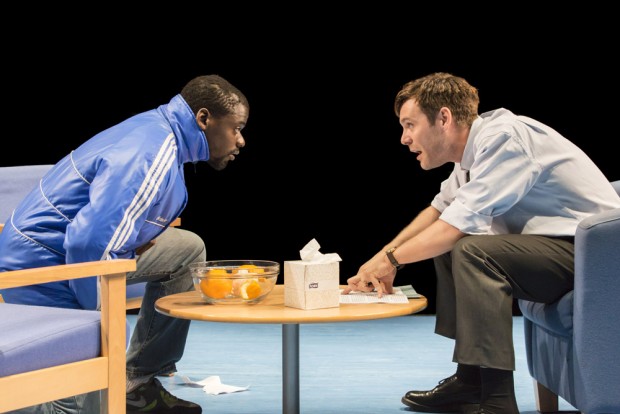 Joe Penhall’s Blue/Orange is one of the best plays of the past two decades. First staged at the National Theatre in 2000, with the dream cast of Chiwetel Ejiofor, Andrew Lincoln and Bill Nighy, it won an Olivier Award for Best Play and has been constantly revived ever since. Not only does it have a strong story, but the characters, and their interaction, are credible, engaging and dramatic, while the play fizzes with ideas as well as emotions. Without doubt, it is a contemporary classic.

Like all the best well-made plays, it has a single set and a limited time span. Located in an NHS psychiatric unit, Blue/Orange shows a power struggle between two doctors, the older consultant Robert and junior doctor Bruce, over the treatment of Christopher, a troubled Afro-Caribbean youth. Christopher has misbehaved in a local market, and been placed in the psychiatric unit. As he reaches the end of his bureaucratically allocated 28 days in care, Robert wants to discharge him and free up bed space for other patients while Bruce argues that he is still seriously ill. He is worried about schizophrenia, and psychosis; Robert insists that the patient is borderline. At first Christopher’s colourful fantasies, for example of being fathered by Ugandan dictator Idi Ami, sound plausible, but then — when he claims that oranges are blue in colour — his condition suddenly seems much more serious.

The cleverness of Penhall’s playwriting comes from the fact that we see Christopher mainly through the eyes of his doctors, so we are never sure just how disturbed he is. Robert, who is researching the cultural determinants of human behaviour, is both a charmingly freewheeling R D Laing figure, all 1960s hippie humanism, and a government functionary who needs to obey market principles by processing patients. He’s also a bit of a racist. At one point, after one of his outbursts in this production, the whole audience goes very quiet. The younger, more idealistic Bruce is certain that he knows what’s wrong with Christopher, but gauche about making his point. In this battle of wills, the political football is Christopher, who is so busy reacting to every move his doctors make that he struggles to find his own voice. When he does, the effect is explosive.

The drama is also a clash of ideas. Robert wants to prove his thesis that the reason for there being “more mental illness amongst the Afro-Caribbean population in London than any other ethnic grouping” is cultural rather than chemical. He’s looking for the Holy Grail of a cure for “black psychosis”, while Bruce is more focused on his patient’s immediate needs. In the middle of their discussions, which also feature delightful passages about surrealist poets and even the graphic novel character Tintin, is Christopher, who supports first one and then the other of his healers.

The duel between Robert and Bruce is a personal struggle of wills, as well as a comment on the state of the NHS, and thus on our current social and political situation. Should the health service be run on a cost-effective basis, with mental patients being discharged “into the community” at the earliest opportunity, or should their needs be prioritised, and what does this mean for the allocation of scare resources? Penhall doesn’t preach, but he writes so forcefully that his views are pretty clear. And, clearly, they remain highly relevant.

Matthew Xia’s thrilling and highly charged revival begins with the audience taking a long walk through dark corridors and then passing through a consulting room that is identical to the one in which the play will be performed. As designed by Jeremy Herbert, the blue decor contrasts vividly with the oranges on the central table. There’s a smell of disinfectant, a feeling of a Kafkaesque institution. It’s disorienting, and slightly dismal. In the near distance, there are shouts and wails — the sounds of other distressed patients.

Of course, what strikes you about this compelling show is not just the design, but also the acting. David Haig’s Robert is a study in power: he is by turns patrician, patronising and pompous. If this actor is more comfortable with the angry moments than with the whimsical ones, he really comes into his own in the more passionate passages when his struggle with Bruce is at its most intense. Playing the younger man is Luke Norris, who brings a quietly convincing sincerity to this conscientious character.

But, however impressive, neither actor quite injects the level of energy that Daniel Kaluuya brings to the role of Christopher. Nervy, manic and changeable, he buzzes like an electric current, raising the emotional temperature until the thermometer begins to ping. He not only conveys the character’s distress, but also his exasperation, and his vulnerability. At every point, he is also a playful kind of guy, enjoying his ability to wind up the two white men. He’s acting, and also acting up. So we’re never sure quite how distressed he is. And that’s the point of this mesmerising play, which is here revived in such a forceful way that it’s both intellectually inflammatory and emotionally satisfying. Each exchange is like a duel, and each duel is humorous as well as deadly serious. By the end of the evening, you feel as if the sparks have flown in all directions. And some have burnt your brain.