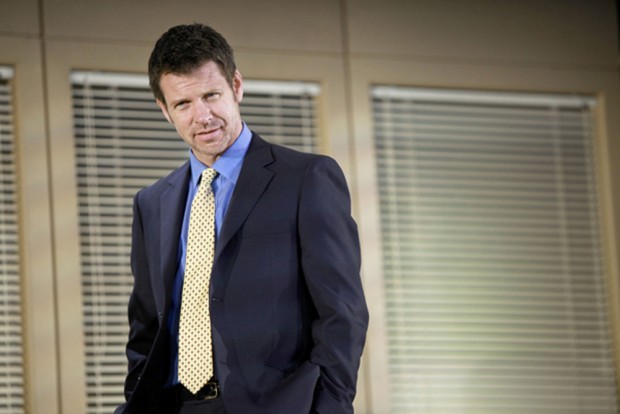 What is with the National and history plays? On the large stages of this theatre, the main fare is historical accounts of contemporary problems. Maybe the programmers here imagine that their audiences, like TS Eliot’s humankind, “can’t bear very much reality”. History always has a nostalgic glow. So instead of commissioning a new play about the current war in Afghanistan, the flagship venue is staging American playwright JT Rogers’s drama about the Soviet Union’s 1980s occupation and the covert war, waged by the CIA, to stop the reds by any means necessary. But does this historical account of a past conflict illuminate the present?

Our guide through the labyrinthine politics of the region is thirtysomething James Warnock, a CIA chief whose job it is to liaise with the Pakistani secret service, and to channel aid through them to the Afghan anti-Soviet fighters. Other interested outsiders include a duo of very different personalities: the cynical and wily Russian Dmitri, and Simon, the messy but truth-telling British agent. Local men are represented by the Afghan warlord Abdullah and his younger subordinate Saeed. And by Afridi, the representative of a Pakistani intelligence agency.

But the focus is James (Lloyd Owen). He starts off as a bit naïve, but grows during the two hours and 45 minutes of the show’s running time. The trouble is that he is just too good to be utterly convincing. His naivety is hardly convincing, his sense of guilt seems unnecessary and his personal frustrations and family sadness seem calculated to blind us to the real cruelties that the CIA is notorious for committing around the world. It’s an idealised picture that even his unattractive bursts of righteous anger do nothing to tarnish.

The main conflict is about who the USA should support, and how. Should they give money and arms to the small but keen groups such as those represented by Abdullah and Saeed, or should they channel resources to Gulbuddin Hekmatyar, the Islamist warlord? And, given that these are top-secret missions, can they afford to provide the latest military hardware to the fighters? OK, these are not the most thrilling of historical questions, but they do fuel the epic plot, which spans a decade and skips across various lands and oceans.

Rogers’s writing style is plain but it has a smooth efficiency, and he sketches out the complex politics of Afghanistan and Pakistan during the 1980s with commendable economy and lucidity. Sometimes, however, it all seems a bit too simple, a bit too obvious. The humour, and there are a lot of jovial jokes at the expense of the Brits, works much better than the more portentous utterances. And there is a fair amount of good material which catches the culture clash between the USA and the locals; here, it helps to know the words of the Eagles’ “Hotel California”, and to remember who Olivia Newton John is. (Actually, I do.)

In the end, Blood and Gifts does have some relevance, if only because Afghanistan is an inescapable disaster which is daily in the news. As, in the play, the conflict turns into a holy war, I felt a chill run down my spine and, likewise, the war-weariness felt in the USA in the late 1980s, when a surge was suggested, seemed depressingly familiar. If nothing else, this play illustrates how little we learn from history. Thanks to Howard Davies’s smooth production, the learning is relatively easy and the experience relatively painless.

Despite some heavy drum beats of doom, the scene changes on Ultz’s versatile set are fast and neat, and the cast, led by Lloyd Owen as James, Matthew Marsh as Dmitri, Adam James as Simon and Demosthenes Chrysan as Abdullah, play their parts with cool precision. This epic, which JT Rogers has expanded from his much shorter play of the same name — and which was part of the Tricycle Theatre’s Great Game: Afghanistan season last year — is entertaining enough as a history lesson, but not deep enough to be a human tragedy.