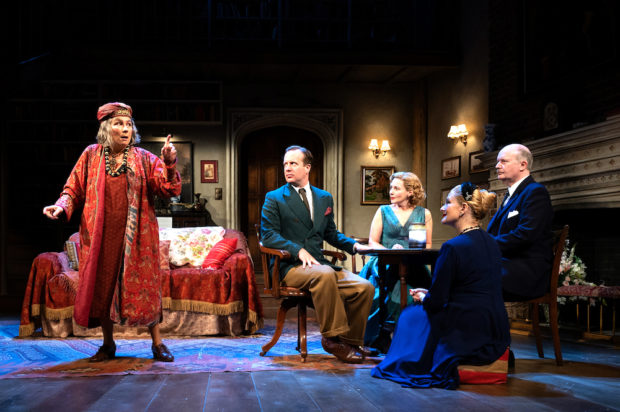 Jennifer Saunders is a one-woman fun machine. As her countless appearances in television shows such as French and Saunders and Ab Fab prove, this triple BAFTA winner is box office magic. The mere incantation of her name is enough to sell out any West End show. So there is something really fitting about casting her as the spirit medium Madame Arcati in this revival of Noël Coward’s 1941 mega-hit, Blithe Spirit, which comes to London from the Theatre Royal Bath, where it opened last summer, in a production directed by the ever-reliable Richard Eyre.

The plot concerns Home Counties novelist Charles Condomine, who lives with his second wife Ruth. In the course of his researches for a novel, he invites the spiritualist Madame Arcati, a thoroughly eccentric personage, to hold a séance. Charles is openly sceptical of her powers, but then she manages to accidentally summon up the ghost of his first wife, Elvira. The comedy comes not only from the clash between his materialism and Arcati’s wonderfully silly spiritualism, but also because Elvira the ghost is only visible to Charles. Not to Ruth, who thinks that her husband is going crazy. As Elvira resumes her role as first wife, Charles becomes the centre of two women’s attentions.

Eyre’s intelligent production squeezes every psychological nuance and contemporary reference from this play, which it must be admitted ages badly with every revival. What comes across most strongly this time is Charles’s imperturbable masculinity. This is the artist as a man’s man. Talent to amuse? Talent to annoy more like. By contrast, both of his wives appear — especially in the #MeToo era — to be much more sympathetic. You cry, or at least wince, to think how callously he’s treated them. His putdowns are horrid. Their different characters come across here nicely: Elvira the passionate and sensual; Ruth the cool and collected. The first wife is full of physical ardour, the second more cosy companion. One the tempest, the other a mild day.

While Coward’s casual mentions of the flu and use of the word “bitch” might raise an eyebrow, it is hard to forget that this is a wartime play with an underlying serious theme. At a time of loss, the idea of summoning ghosts of lost loves through a séance has a powerful attraction. And although Madame Arcati is a comic creation of genius, it is the fantasy of daily life with a spirit that dominates the world of the play. In this beautifully structured well-made drama, Charles is represented as a man who could live with two wives, one for passion, the other for company. Lucky boy. See what I mean about masculine dream life?

At the same time it is really very sad that British theatre just can’t shake off our culture’s love of nostalgia. Coward’s vision of England — with its supercilious posh toffs and silly servants (an image he effectively overturns) — is honoured by Eyre and his team, when surely it is high time it was questioned. Although this is a scrupulously detailed and kind account of a classic, it is also frankly lacking in surprises and in laughter. In fact, this is one of the most serious versions of a comedy you could ever hope to see. Eyre treats Blithe Spirit as if it was a play by Ibsen when he should have embraced it like a farce by Brian Rix.

Even Saunders’s performance is more fussy than funny. Sure, she has great stage presence, with her swirling windmill arms and her frantic drumming on the furniture, her school teacher mien and her high-pitched invocations of the spirit world. It’s a great character study, but for all its eccentric glee it struggles to raise a smile. She is well at home on Anthony Ward’s excessively detailed set, and Howard Harrison’s lighting and Paul Kieve’s illusionism both contribute to the spooky atmosphere of the evening. The central trio — Geoffrey Streatfeild (Charles), Lisa Dillon (Ruth) and Emma Naomi (Elvira) — are excellently nuanced, while Rose Wardlaw’s maid gets a well-deserved round of applause. Shame that she gets more laughs than all the others put together.