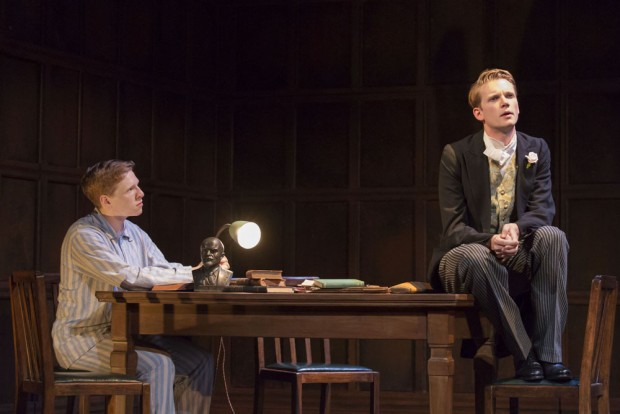 I must confess to feeling a warm tremble every time I hear “I Vow to Thee, My Country”, a result of the potent mix of Gustav Holst’s stately music and Cecily Spring Rice’s allusive words. So when Julian Mitchell chose the words “Another Country”, from the poem’s second verse, as the title for his 1981 play, both the name and the story had that wonderful quality of resonance. After all, I’m as fascinated as the next man by the tale of treason that is the Cambridge spy ring, which culminated in the defection of Guy Burgess, Donald Mclean and Kim Philby.

Instead of Guy Burgess, Mitchell gives us Guy Bennett, a gay pupil at a select public school who finds his ambition to join an elite society in that institution blocked because of his flamboyant behaviour. Meanwhile, we see how his friend, Tommy Judd, who is a convinced Marxist-Leninist, refuses to play by the rules. Together, this unlikely pair of friends determine to get their revenge on the English Establishment. You can see why: here are the arcane rituals of public-school life, and the sadistic delight of the some of the prefects in corporal punishment. Before they do so they must face the humiliations of everyday life at an English public school. The story begins with the suicide of a young pupil, Martineau, who has been caught having sex with another boy. As the head boy and prefects try to cover up this scandal, Fowler, a senior, leads a crackdown on overtly gay boys such as Bennett, which results in his public flogging.

As a portrait of the ruling class, all Eton-style toffs, the play is both accurate and relevant in the current political climate. Mitchell’s central idea is that political betrayal is related to sexual persecution and this feels thoroughly convincing as we watch this representation of hypocrisy amid privilege. At the same time, you can appreciate the point that public school offers good practice at concealing your feelings — a skill also essential when spying for the enemy.

In the second half, a visit from Vaughan Cunningham, a liberal writer who is the uncle of one of the boys, allows Mitchell to both satirise the ideas of liberal intellectuals, and to put this appealing character on stage in all his humorous humanity. For Cunningham, doubt is the basis of life — and he becomes the moral centre of the play, uttering the truth that life is essentially chaotic.

Following its successful run at Chichester last year, Jeremy Herrin’s production gets a fully deserved transfer to the West End. Casting a young group of actors gives the piece authenticity, at the cost of some charisma. But Rob Callender grows convincingly from trivial poseur to angry young man as Bennett — and Will Attenborough is a thoroughly decent Judd. Julian Wadham’s portrayal of Cunningham is a highpoint. As “I Vow to Thee, My Country” is heard again at the end of the evening I felt a real surge of love for this marvellous, well-crafted play.