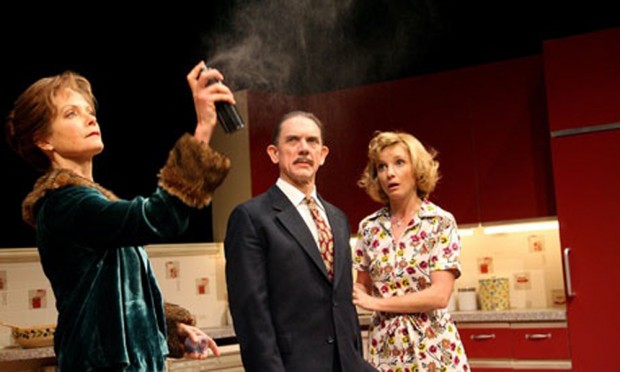 With Christmas a rapidly fading memory, there is one seasonal show that sticks in the mind. Alan Ayckbourn is back in the West End with an excellent revival of his vintage 1972 comedy, Absurd Person Singular, a piece that provokes laughter and embarrassment in less than equal measure: it starts off light and funny, but ends up heavy and sad. Perhaps that in itself is a testament to its seasonal relevance.

The play is set in three different kitchens on three successive Christmases. In the first act, Sidney and Jane Hopcroft fret about entertaining two couples: Mr and Mrs Bank Manager (aka Ronald and Marion) and Mr and Mrs Architect (aka Geoffrey and Eva). From the off, class antagonism is evident: the shopkeeper Sidney and his homebody wife struggle to impress their social betters, who respond with a mix of patronising contempt and effortless superiority. In the middle act, the action jumps to the architect’s kitchen where Eva spends the whole time unsuccessfully attempting to commit suicide while Sidney and Jane help out with the domestic chores and even do a spot of DIY. Already things are on the turn, as the lecherous Geoffrey tries to console Eva about his infidelities, and Ronald and Marion are noticeably less confident. Finally, in act three, the wheel of economic fortune has turned full circle: in the banker’s countryhouse kitchen, Ronald tries to console both Marion, whose drink problem has got completely out of hand, and the now unemployable Geoffrey, whose latest building project has come unstuck. When the Hopcrofts arrive, the social order has been overturned: they are now on top, flushed with economic success, and determined to get the others to dance to their tune.

It’s a sweet revenge fantasy, played out on Michael Pavelka’s vivid sets, where wild hilarity instantly turns into dismal distress. But while it is true that, with this portrait of how the entrepreneurial lower-middle class overcomes their solid but vaucous middle-class superiors, Ayckbourn seems to predict the “greed is good” Thatcherite 1980s, the play is actually much more relevant than that, showing, as it does, the deeply ingrained sexism and emotional constipation of English society. A lot of the laughter comes from male insensitivity, and the rest from the sheer inability of the characters, none of whom are in the least bit likable, to really express what they really think and feel. I mean, really.

Alan Strachan’s excellent production is funny, and gradually conveys the bitter taste of Ayckbourn’s acerbic vision. Rarely has English suburban life seemed more depressing or more awkward. It’s funny, yes, but in a soul-destroying way. Luckily, a great deal of the pleasure of watching this production comes from a superb cast at the top of their game: Jane Horrocks gives Jane a fussy silliness that barely hides her social anxieties while David Bamber’s Sidney grows from being a struggling inferior into a dominant reptile who relishes nothing more than his new-found power over the idiots who once patronised him. Lia Williams is wonderful in all three of Eva’s incarnations, from ditsy hippie to suicidal hausfrau to sensible wife, while Jenny Seagrove as Marion visibly declines into a terrifying alcoholic stupour. All the men — including David Horovitch’s Ronald and John Gordon Sinclair’s Geoffrey — are bullies, and memories of laughter at their antics always goes hand-in-hand with dismay. Welcome to the suburbs.