Home » Blog » About The Last Cigarette

About The Last Cigarette 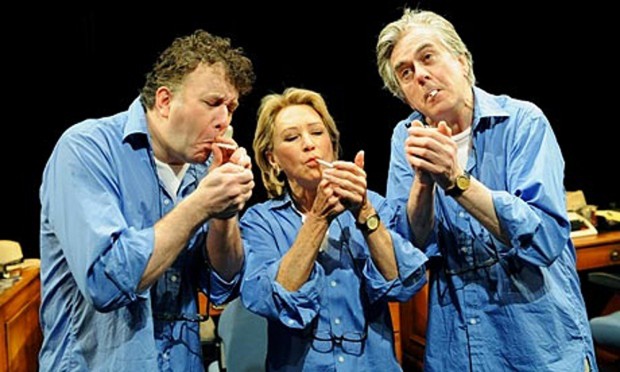 Theatre critics have what you could call, ahem, a flexible job description. In other words, they don’t have any formal qualifications. At least, not in this country. Clearly, the minimum requirement is a passion for theatre, an ability to string a sentence together and a modicum of courage. They do, after all, have to say what they really think. Pirate Dog, who usually contributes nothing this blog, has brought the following story to my attention. In Theatre Record, the thoughtful Financial Times critic Ian Shuttleworth notes that in his original review of The Last Cigarette, Chichester Theatre’s celebration of the life of Simon Gray, he described as “cowardly” the theatre’s decision to make the cast of the play pretend to smoke cigarettes on stage. The Daily Telegraph’s Charles Spencer used the same word. I totally agree. Since the Health Act 2006 allows an exemption from no-smoking regulations for stage performers on the grounds of “artistic integrity”, surely this is a case where such an exemption is not only justified but also essential. To picture Simon Gray without a real, smoke-curling fag in his gob, is like imagining Sherlock Holmes without his pipe. Gray even smoked in his sleep. But then, I suppose, Chichester seems determined to prove that human stupidity is limitless. Likewise, it is grimly amusing that while the idiots at that venue have banned smoking on stage, the idiots at the FT are being similarly squeamish about the truth: some editor changed Shuttleworth’s “cowardly” to the weasel-toned “problematic”. A cowardly act? At times like this, the temptation to start spluttering about political correctness is very, very strong.