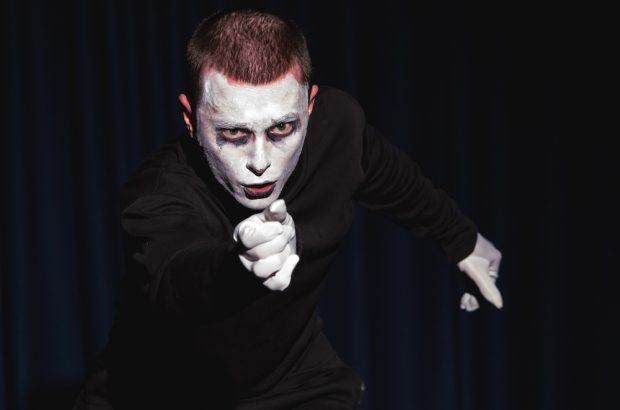 Yesterday evening I went to see Dog/Actor at the Etcetera Theatre in Camden. Written by Steven Berkoff, in his instantly recognizable snarling voice, these two short monologues are brilliant examples of how a person’s conscious thoughts can obscure the emotional truth of what they are feeling; they are also great opportunities for any performer. In the first one, Dog (first staged in 1993), a working-class football hooligan takes his dog, a fierce pitbull called Roy, for a walk, as well as to the pub and to match. Although today there is something almost nostalgic about this kind of character, his racist bile is as real as ever, and the simmering violence of his attitudes remains convincingly chilling. Likewise, the scatological humour sounds like a metaphor for the condition of all of the neglected of the country. The second piece, Actor, which dates back to 1984, is funnier and sadder. This unemployed thesp is a study in failure, which always feels like a comment on the state of the nation, especially when articulated with delusions of superiority and a brutal lack of respect for women. At the present time, this comes across as highly relevant. As a one-man show, performed and directed by Stephen Smith, this is a compelling experience, both uncomfortable and moving. As the skinhead he has a frightening intensity which peeks out from the character’s attempts at humour and cheery manliness; his impersonation of Roy is enjoyably vivid and scary. Then, as the actor, there is a real vulnerability in the passages about his mother, while the walking pace of the narrative is beautifully created with a loop pedal soundscape that gives the story its heartbeat. Smith performs a tour de force of physical theatre enlivened by a great choice of rock music: he is particularly good at showing how compulsive humour can be a shield against painful emotions. The smiling face conceals a heart that is cracking. Part of the 16th Camden Fringe Festival, this touring 50-minute double bill by Threedumb Theatre — first staged at the Watford in 2018 — is both enjoyable and lacerating. A riveting revival.