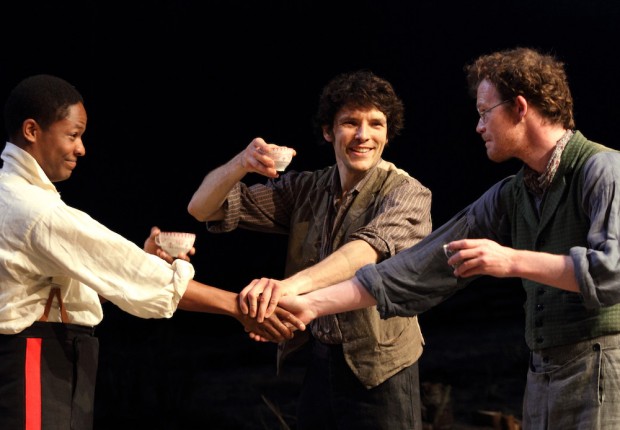 Since the Northern Irish playwright’s death in 2015, Brian Friel’s work is rarely sighted in London. Yet he was once a ubiquitous, and often joyous, presence on British stages. So there’s a real feeling of anticipation about this revival of his 1980 drama, Translations, a major play which has enjoyed an enormously good international reputation since its first staging at the Guildhall in Derry, Northern Ireland. The fact that it is directed by Ian Rickson, who since quitting the Royal Court in 2006 has put on a series of modern classics, each time treating an old play as if it had been written yesterday, only adds to the expectation. Can he work his magic on Friel’s masterpiece?

Set in Baile Beag, in County Donegal, in 1833, this history play explores how the colonizing English translate the Irish culture into their own frames of reference (the place name, for example, soon becomes Ballybeg). The story begins when Owen, son of the hard-drinking hedge-school master Hugh, returns home from Dublin, having been away for six years (in his absence, his brother Manus, an aspiring teacher, has been their father’s deputy). Owen is accompanied by two English soldiers — idealistic Lieutenant George Yolland and pragmatic Captain Lancey — both of whom are creating a detailed Ordnance Survey map of the land. As the bilingual Owen acts as their interpreter, the newcomers chart the area, turning old Irish place names into new English equivalents. So Bun na hAgbban (“mouth of the river” in Irish) becomes Burnfoot in English. It’s all a bit bathetic, the banalisation of tradition. And, of course, imperialist.

But Friel is too good a writer to deal in cliché so, in the play, Owen has no problem with such translations, while it is Yolland who, having fallen in love with the island’s culture, is unhappy about Anglicizing the conquered land. To add to the complexity of the situation, most of the Irish characters are unable to understand or speak English, but, thanks to Hugh’s unofficial school, are being taught to read Greek and Latin. The old generation, Hugh, and the fantasist Jimmy Jack, are steeped in the Classics, while the young Maire sees English as the language of the future, and she dreams of emigrating to America. Another young woman, Sarah, has a speech impediment and struggles to articulate her name, which contrasts with the English Captain Lacey’s confident imperial demeanor (though he speaks not a word of Irish).

Setting the play in the 1830s, an era of radical changes, also enables Friel to contrast Hugh’s kind of idiosyncratic education with the new national schools, which, like the military sappers, aim at standardization. It is also an era of armed resistance, with the Donnelly twins, a pair of anti-English freedom fighters, active in the background of the story. As a love triangle develops between Maire, the ever-hopeful Manus and the newcomer Yolland, the emotional temperature rises when the English lieutenant goes missing, having probably been kidnapped, an act that provokes Lancey to threaten a scorched earth policy. And reprisals. The resulting tragedy is a metaphor for the troubled relationship between England and Ireland in the 19th century, and more recently.

Translations has a good story, yet first and foremost it is a play about language and identity. The two best scenes are when Yolland and Owen (who is mistakenly named Roland by the English) discuss the changing of different place names, and the encounter between the Lieutenant and Maire, in which the two youngsters have to communicate without a shared language. At times, however, it feels as if Friel’s interest in language has sucked some of the energy out of the emotional relationships in the play, with the playwright preferring to discuss the mysteries of words and meaning rather than delve into the love triangle. Likewise, by the end, we learn more about the inner life of old Hugh and Jimmy, especially when they are drunk than we do about the younger generation.

Still, Friel’s play is beautifully written, both compelling in its ideas and heartwarming in its humour, and gets a typically meticulous production from Rickson and his team. Rae Smith’s set creates a small playing space at the front of vast Olivier stage, a school room cluttered with books, buckets, and stools, with a distant misty, boggy background, partly Turneresque in its cloud formations and partly Beckettian in its bleakness. A heavy peaty scent hangs in the air. Adetomiwa Edun and Judith Roddy as Yolland and Maire have a youthful freshness and easy sincerity, with the added bonus that Edun’s racial heritage suggests a broader colonial sweep. And, when his character says that he has been spat on in contempt, it feels like a blow to the stomach. Colin Morgan’s energetic Owen also embodies some of the disquiet of a man caught between two cultures, being both colonized and colonizer. Ciarán Hinds gives Hugh a towering majesty, although not all of his speeches are as clear as they could be, while Dermot Crowley’s slightly senile Jimmy Jack is likewise impressive. Mention must also be made of Seamus O’Hara’s frustrated, lame Manus and Michelle Fox’s touching Sarah.

If at times I feel that the play, which at its best is a chamber piece, struggles a bit with the huge space of the Olivier Theatre, it is hard to deny the impact of its rich text, brimming with compelling ideas about language (how naming can be creative) and its role in modernization and, indeed, globalization. Here English is both an imperialist instrument and a tool of liberation, while Europe’s Classical heritage is seen as opening the minds of a small village community, whose poverty and hard toil is well brought out by Rickson, a director who not only makes us well aware of the text’s intimations of the Great Famine but also reminds us that language continues to be a controversial issue in Northern Ireland today. This is an empathetic, entertaining, relevant and moving revival of a modern classic.