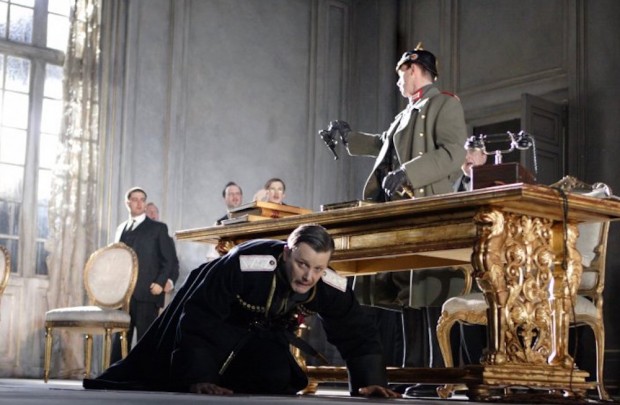 Now here’s a question: how, in the early 21st century, do you go about staging Stalin’s favourite play? Over the past couple of years, the National Theatre — for reasons that are not entirely clear to me — have been reviving forgotten stories from the bad old days of the Soviet Union. Now, after the success of Maxim Gorky’s Philistines, comes Mikhail Bulgakov’s The White Guard. Bulgakov struggled with more than the censors to write this play, which was produced in 1926 as The Days of the Turbins. It was commissioned as a stage version of his novel, The White Guard, which had itself started life as an unproduced play, The Turbin Brothers.

Set in Kiev in the immediate aftermath of the Russian Revolution in 1918-19, the play is an autobiographical account of Bulgakov’s own family. During these turbulent years, the Turbin family, whose loyalties lie with the Tsarist past, experience massive disruptions and anxiety as the Germans take over the city, install the puppet government of the Hetman, then withdraw as a brutal Ukrainian nationalist army, led by Petlyura, takes over. Finally, the Bolsheviks win the civil war, and the play ends with their arrival in the city.

Although the original was badly mauled by the censor, and attacked by Communist critics, Stalin actually liked it, and apparently saw it 15 times! What he admired was the fact that the reactionary White Russians are shown as noble, worthy opponents of the Reds, whose inevitable triumph seems as if it is sanctioned by history. But little of this is clear in Andrew Upton’s new version of the play. Upton has scraped away some of the censors’ work, tightened the plot, and expanded on the humanity and notions of honour of the Turbins. At the same time, he has turned a serious Russian play of the 1920s into the kind of light-hearted comedy that British audiences in the 2010 can take to their hearts.

In particular, some of the characterization suffers. The basic situation concerns the Turbin brothers, who are supporters of the White Guard Tsarist counter-revolution. But the focus is on Elena, their sister. Her husband, Talberg, leaves her and flees to Berlin, while a local lieutenant, Leonid, starts to sniff around her skirts. At the same time, the arrival of Petlyura’s brutal Ukrainians destroys the lives of two of the brothers.

Howard Davies’s much over-praised production makes the husband into a silly stage figure and thus robs the story of much of psychological conflict. There’s a lamentable tendency to differentiate the brothers by means of caricature, as if the audience couldn’t tell them apart, and the result is a real loss precisely of what appealed to Stalin: the seriousness and nobility of these losers.

For those interested in Bulgakov, the play offers a lite version of the play, which is enjoyable in its portrayal of the family relationships of an ordinary bourgeois family in the face of enormous social upheavals. But, even so, the first half an hour is a bore, and the great final anguish about the futility of dying for a lost cause is little compensation for an unremarkable drama. You could see this revival as part of the recent reawakening of interest in Marxism and the idea of rapid social change. After all, doesn’t the behaviour of bankers and politicians make you really angry? Angry enough to dream of violence, revolutionary justice and the utopian idea of creating a new world? If so, then Bulgakov really is not for you — all he shows is the human costs of political enthusiasm.