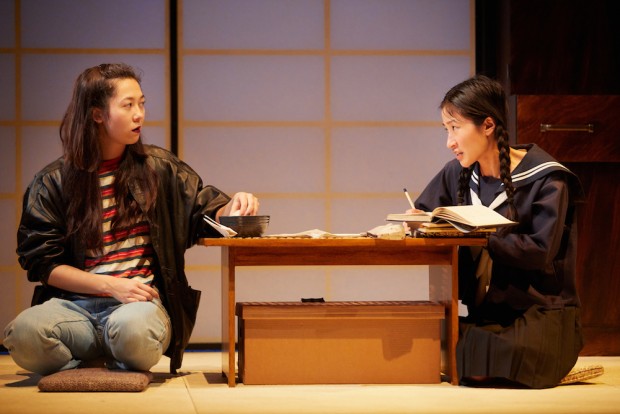 You could call it an absence of yellow. Until very recently British theatre has been pretty poor at representing the stories of Chinese and East Asian people, and even of British East Asians. In 2016, Andrew Lloyd Webber called British theatre “hideously white” and, despite the sterling work of groups such as Yellow Earth theatre company, there have been more than one casting controversies where white actors have played Chinese and East Asian characters. So the first thing to say about Japanese-Northern Irish writer Francis Turnly’s epic The Great Wave, staged by the National Theatre in a co-production with the Tricycle Theatre, is that it’s great to see such a large cast of performers of East Asian heritage. Okay, but what about the play?

Based on the eye-opening true stories of Japanese people abducted by the North Korean regime, in order for them to train spies and saboteurs, the story starts in 1979 in the household of thirtysomething widow Etsuko. She has two schoolgirl daughters, the clever older Reiko and the younger more lazy Hanako. One night, during a terrible storm, they are visited by Tetsuo, a schoolboy who fancies Reiko. When Etsuko pops out to work, he suggests going down to the beach — despite the thunder and the rain. The girls agree, but only Reiko returns. What’s happened to Hanako?

At first, the police assume that Hanako has been murdered. Or has run away. They give Tetsuo the third degree. But the truth is much more strange. She has been abducted by a special North Korean commando squad, and taken to live in that isolated regime. Why? Well, they need Japanese nationals to teach their potential spies how to speak the language properly, and all about Japanese society and its customs. So here a disorientated Hanako meets Jung Sun, a young trainee spy. Slowly a relationship between the two develops. Meanwhile, both Etsuko and Reiko cannot accept that Hanako is dead. They join forces with Tetsuo, now a budding journalist, to investigate.

Years pass as this epic play spans a quarter of a century, showing what happens in both Japan and North Korea. In Indhu Rubasingham’s absorbing production, the piece has a narrative pace and neatness that allows a series of themes to emerge: mother and daughter relations, teacher-pupil relations, sibling relations. There is a lot about duty, guilt and personal responsibility. In the upside-down world of North Korea, a Japanese failure might become a gifted success, and a useful comrade might turn into a useless agent. Doing the right thing in a topsy-turvy world is not easy. But sometimes Japan can also feel constricting.

With its title, The Great Wave gestures at the famous image by Hokusai, and the original sea wave at the start of the play rushes through the story, symbolically casting new details onto the shore of the narrative and breaking expectations like matchwood. The play’s picture of international politics is compelling and relevant. The Japanese Foreign Office argues that the country can’t afford to provoke North Korea. They are also conscious of Japanese war crimes during its long occupation of the Korean peninsula. (They could almost be talking about Russia today.)

Still, in this extraordinary story, the indifference and evasions of the powerful contrasts with the courage of ordinary citizens. But the fact that not everyone can be a hero is also stressed, as are the costs of activism. There are several painful choices in this story. And although both Japan and North Korea are shown as being equally capable of sacrificing their citizens in the cause of state policy, the North Koreans are clearly more violent, both psychologically and physically, and there is no moral equivalence between the two systems.

Turnly tells this documentary-style story with clarity, and underlines the emotional complexity of kidnap. There are moments when Hanako seems to become a model North Korean, acting out exactly what’s expected of her in this strictly ordered state. At the same time, she cannot forget the fact that she is different from other Koreans, and occasionally she rebels against the conditions of her imprisonment. On the other side of the Sea of Japan, Reiko is as incarcerated as her sister. Not physically, but mentally. Her life is on hold as she searches for news about Hanako. She is as stuck in the past as her sibling, and her mother.

Gradually, the story moves towards its intensely moving climax, unmarred by a couple of melodramatic notes. The whole ensemble cast is great, with Rosalind Chao (Etsuko), Kae Alexander (Reiko) and Leo Wan (Tetsuo) doing most of the work in the Japanese scenes, while Tuyen Do and Kirsty Rider (Jung Sun and Hanako) and Kwong Loke (a nameless official) do the same for the North Korean episodes. Tom Piper’s simple and atmospheric sets, with swirling video imagery by Luke Halls, add a lot to the thrilling feelings that surface in this story of loss, guilt and partial redemption. The Great Wave really roars.