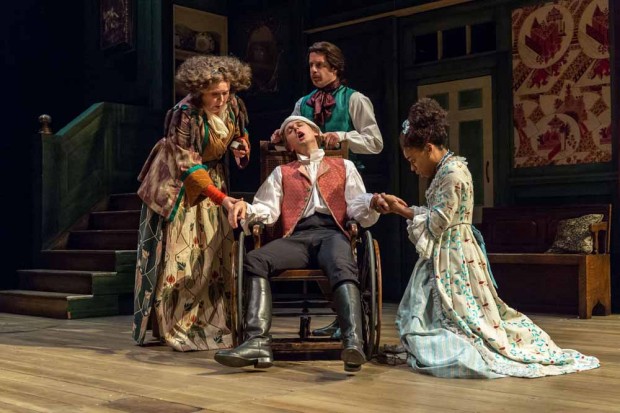 British theatre is thriving, but not all parts of the repertoire are in equally good health. For almost a decade, plays from the Elizabethan and Jacobean eras have been staged by the Royal Shakespeare Company, Shakespeare’s Globe and the National Theatre (to mention only the big hitters), but plays from the long Restoration age (from 1660 to the early 18th century) have been as hard to come by as a Lottery win. So this opening of George Farquhar’s The Beaux’ Stratagem at our national flagship is quite a rare delight.

First staged in 1707, the story concerns Archer and Aimwell, two young bloods, the beaux of the title, who having spent their fortunes, now must marry money in order to maintain themselves in the style they have become accustomed. So, with their last £200 pounds, they leave London to seek suitable heiresses that are not too burdened with knowledge of their former exploits. Arriving in Litchfield, they decide that Aimwell should pretend to be a rich lord, with Archer as his footman. By doing so the play comments on how class is a status that can be faked, as Aimwell goes up a few notches on the social ladder, and his friend goes slumming.

Both men soon meet the sweet-natured Dorinda, an heiress with a fortune, and Aimwell begins his plan of seducing her. Meanwhile, Archer goes after Dorinda’s sister-in-law, young Mrs Sullen, who is unhappily married to the local squire, a man who prefers to get drunk than have sex with his wife. Add to these two couples a dodgy landlord, whose daughter Cherry also has an attraction for Archer, a gang of highwaymen, a captive French officer, a priest with an disguised Irish accent and a strange herbalist, and this cheerful drama is soon cooking.

Unlike most Restoration comedy, the initial cynicism of the situation — two lads on the make — eventually blossoms into a more sympathetic and sincere form of love story. But before this can happen, Farquhar engages the audience in a debate about unhappy marriages and the need to reform the divorce laws, which at the start of the eighteenth century meant that marriages, once contracted, could not practically be dissolved. Incompatible couples could only separate, not divorce and remarry.

So a play that starts with two rakes, ends up being a very empathetic account of two women: Dorinda and Mrs Sullen. And it is the most troubled woman, Mrs Sullen, who really dominates the action. Seduced by Archer, she wants to give in to her desires, but cannot commit a brazen adultery — despite her brute of a husband. So Farquhar concocts a debate — mostly derived from John Milton’s pamphleteering — about the need for divorce on grounds of incompatibility. The result is a sentimentally fairytale ending to what started as a realistic account of predatory men.

As in all of his plays, Farquhar writes in a good-natured and sunny way about the foibles of his characters, and this is beautifully echoed in Simon Godwin’s romp of a production, which is designed by Lizzie Clachan. Along with playwright Patrick Marber, Godwin has trimmed the text of The Beaux’ Stratagem and then added a wonderfully warming soundtrack of folk songs performed by a band of musicians who appear onstage whenever a character has to sing. This provides some happy comedy, as when the French Count Belair is accompanied by an accordionist. Likewise, Archer’s Trifle song is hilariously playful.

A delightfully physical production, this is an evening of almost farcical adventures acted by a large cast that clearly enjoys every minute. As Aimwell and Archer, Samuel Barnett and Geoffrey Streatfeild are a study in contrast, with the former slightly more delicate than the latter, although his convulsions scene is a total hoot. Susannah Fielding’s Mrs Sullen inevitably enjoys her role as a complaining wife, while Pippa Bennett-Warner avoids the temptation of simpering as the more virginal Dorinda. The huge cast includes some lovely cameos — Pearce Quigley’s servant Scrub, Lloyd Hutchinson’s landlord Boniface, Jane Booker’s eccentric Lady Bountiful and Amy Morgan’s feisty Cherry — and the show delivers an experience characterised by wit, joy and affectionate good humour. Lovely. Really lovely.