Sense of an Ending, Theatre 503 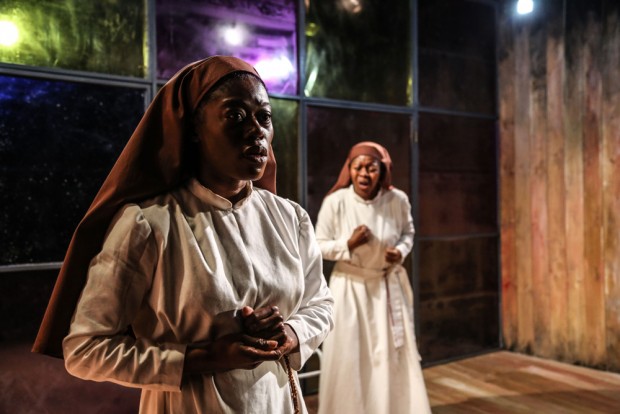 Genocide is a compelling subject for theatre because it raises questions about public forums for questions about witnessing, truth, justice and reconciliation. American playwright Ken Urban’s Sense of an Ending — which won the Best New Play award at the prestigious Williamstown Theatre Festival — is an account an episode in the Rwandan genocide of 1994, when during a period of about a hundred days Hutu militias killed some 800,000 members of the Tutsi minority. And, like all the best drama on such subjects, it shows not only how truth is a contested territory, but also explores the human cost of empathy and forgiveness.

Although based on extensive research, the story is a fictional one. It is 1999, and two Roman Catholic Hutu nuns — Sister Justina and Sister Alice — are being held in a Kigali jail, accused of participation in the genocide. As they await deportation to a war crimes tribunal in Europe, Charles — a disgraced former New York Times journalist — arrives from America to interview them, hoping to recover his reputation. Having once been compromised by his plagiarism of the work of others, he is now determined to get at the truth.

The African-American Charles is guided through the complexities of Rwandan politics by Paul, a Tutsi corporal in the Rwandan Patriotic Front who is convinced of the nuns’ complicity in a massacre during which hundreds of Tutsis were hacked to death and burned alive in the nuns’ church. But when Paul introduces him to an unexpected witness to this event, a survivor called Dusabi, the uncertainty increases: how did Dusabi survive when for years people have said that there were no survivors? Is he just a government plant? And whose story should Charles tell: the nuns’ or Dusabi’s?

Urban’s play is a compelling political thriller which not only discusses major issues of guilt and complicity, but also examines the moral choices made by all of his finely drawn characters. The writing is tense and taut, unsentimental and absorbing, and Jonathan O’Boyle’s pacy production has a breath-taking intensity (there were times when I was literally holding my breath) and immense theatrical power. What draws you in is the atmosphere: Sense of an Ending is a work of deep shadows, literally and metaphorically, as well as flashes of violent imagery, pulsing lights and moody music which combine into a powerful descent into a well of darkness.

This is a story of moral complexity. The two nuns are accused of giving petrol to the Hutu militiamen. But did they have a choice? Resistance would have been punishable by rape and dismemberment. Not everyone can be a hero. They are accused of singing hymns while the massacre took place. But what’s wrong with that? Yet, in a way that chimes perfectly with their Catholicism, they are certainly guilty: in their hearts, both nuns are prejudiced against the Tutsis — and this ethnic hatred predated the genocide, made the killing possible. The vicious thought is morally culpable.

At the same time, Urban shows how the nuns are tortured by this self-knowledge. And, in the figure of Dusabi, he argues that victims need to experience the act of forgiving in order to move on. At one point, when Dusabi performs his memory of the massacre Cecilia Carey’s set, with its wooden planks and stained glass panels, is washed with colour and light. It’s a memorably haunting scene. Whether Charles ever gets to write the truth about this case is a moot point. In the end, the career of the American journalist is less important than the lives of the Africans.

There’s a real excitement in seeing questions of complicity and blame being posed so deftly, so ambiguously, so humanely. And in understanding that, in situations of extreme horror, truth remains a casualty. Good performances from Lynette Clarke (Justina), Akiya Henry (Alice), Ben Onwukwe (Charles), Abubakar Salim (Paul) and Kevin Golding (Dusabi) help this evocative and intelligent 90-minute production paint indelible pictures both of horror and of redemption, confirming my view that the best political theatre is fictional. When I saw the show, its effect was stunning: at the end, the audience was too shocked to clap. It’s a moment to treasure.