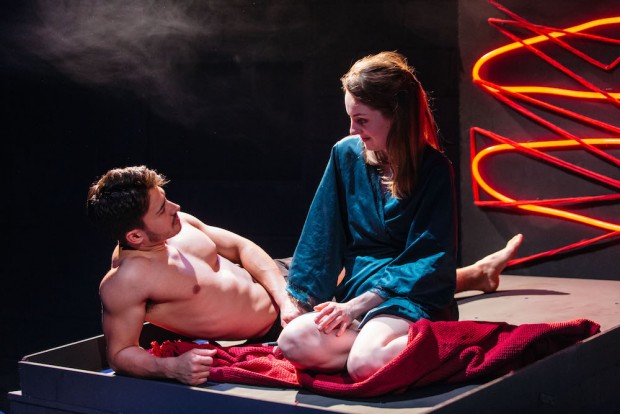 Love may well be the strongest four-letter word, but what is the latest news from the front line of the sex war? Who better to ask than Michelle Barnette, whose play, Love Me Now, has casual relationships and today’s hook-up culture as its central theme. She’s a young, female professional who should be able to take the erotic pulse of her generation. Having trained as an actor, she first worked as a producer and now makes her debut as a playwright. It’s the first play I’ve ever seen to include in its credits a “fight and intimacy director” (Enric Ortuno), so my expectations naturally rose. After all, it’s never too late to learn something about about intimacy. But what exactly?

Love Me Now — a phrase that might be spoken in anything from a commanding roar to a pitiful whimper — is a short 75-minute piece which explores in a handful of scenes the life of a successful young middle-class woman called B. Having hooked up with A, a charmingly boyish yet muscular philanderer, she asks him what their casual relationship might become. He replies, “It can be anything you want it to be.” From this idealistic and liberated proposition the play develops through a series of scenarios that show some of the problems of contemporary straight sexual relationships. Since both A and B have decided to just be fuck buddies you’d think that this would work out fine. You’d be wrong.

At first, the idea that a man and a woman could just meet up for sex reminded me strongly of Marlon Brando and Maria Schneider in the 1972 film Last Tango in Paris (and we all know how that ended, don’t we?). But, perhaps in the age of Tinder and Bumble, a better reference point might be Emily Witt’s recent book Future Sex, which concludes with a vision of a technological fix to sexual inhibitions, with a new digital generation whose “lives would be free of timidity. They would do their new drugs and have their new sex. They wouldn’t think of themselves as women or men. They would meld their bodies seamlessly with their machines, without our embarrassment, without our notions of authenticity.” Well, it sounds like a good idea, if a touch utopian.

In Barnette’s play, B is a bit like the “cool girl” of Gillian Flynn’s Gone Girl, being intelligent, sassy and up for anything. She has a good job, practices yoga for the sake of buying outfits and posting pictures of herself on Instagram, and treats sex as recreation. She appeals to men, and she knows it. She’s confident. Feminist. Her lover A is a bit of boaster, claiming to have five other regular girlfriends, and he is less concerned with her sexual satisfaction than his own. There’s a scene in which the couple discuss the fact that he welcomes her blow jobs, but seems to be reluctant to go down on her. Is this because he doesn’t care about her pleasure, and is he just a classic “Wham, Bam, Thank You Mam” type pf person? Basically, a male chauvinist pig.

Barnette writes with a facility that relies on her perceptiveness and sense of humour. The dialogues are insightful, cheerful chatter with a bit of an edge, and plenty of funny moments. Occasionally, there’s a literary reference — “The lady doth project too much” — or a cultural one — the 2008 movie Teeth with its “vagina dentata” or a good joke about Siri — but mostly it’s just smart flirting which slides into disputes and arguments. The sexual tension pulses under most of the exchanges, and A’s masculine aggression bursts out at one point in a shocking scene which forces both of them to reassess their relationship.

A third character, C, is introduced when B stops seeing A. C is an awkward, pompous and mansplaining kind of guy, and his brief encounters with B serve as a contrast to her much more passionate attachment to A. In B’s imagination, A is always present, the third person in the bed whenever she tries to have sex. Intimacy, it seems, is so difficult to find that, once you have it, you need to hold it tight. Don’t throw it away. But despite some strong lines — “You stole my joy” — and her realization that all she wants is love, the final 20 minutes of the play are a bit repetitive and a bit redundant, serving mainly to suggest that the absence of a strong story is the play’s chief weakness.

Jamie Armitage’s production has a super set, designed by Fin Redshaw, which throbs with red neon, implying sex, anger and pain. As a show, good performances by Helena Wilson (B), starting off in a “Voulez Vous” T-shirt, Alistair Toovey (A) and Gianbruno Spena (C) keep the emotional temperature rising from cool to hot, and Armitage makes good use of the space to convey an experiential sense of the chronic circularity of the love relation. He’s less successful in giving us a clear idea of the timescale of the play, and maybe Barnette’s text could have been a bit less reliant on repeats, although I did like the fantasy elements of the ending. Despite the inconclusive nature of the story, it does give a vivid impression of how some millennials view sex as transactional and love as impossible.