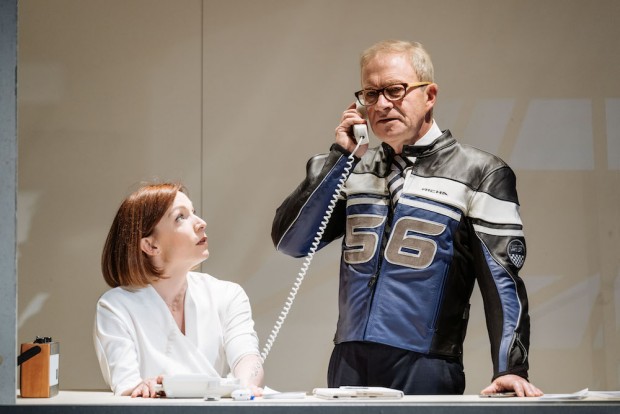 We are now pretty familiar with the idea that human reproduction (making babies) has been turned into big business, and there have already been several good recent plays about desperate couples and surrogacy — Vivienne Franzmann’s Bodies and Satinder Chohan’s Made in India — so is there any more to be said about giving nature a helping hand? Hampstead Theatre certainly thinks so. In the 40th anniversary year since Louise Brown became the first test-tube baby it is marking the occasion by staging Jemma Kennedy’s ambitious new comedy about giving biology a boost. And it gets its own helping hand from a cast that includes Harry Enfield (who plays several roles, including God!).

Serena and Jeff, a thirtysomething professional couple, are having trouble conceiving a baby. After a few failed fertility treatments, they visit Genesis Inc, where Dr Marshall (Enfield) persuades them to try again. At considerable financial cost. Despite the fact that this clinic typically has a 70 per cent failure rate, the business is an attractive proposition for stock-market floatation, which brings 42-year-old Bridget into the picture. She works in finance and sells her services to Marshall by pointing out that she understands the business intimately — in fact, she has had her own eggs frozen.

At home, however, this high-flyer is less happy as she shares her life with Miles, who is gay and works as a music teacher at a Roman Catholic school. Since he is half Jewish, you can imagine the jokes that follow. They have known each other since uni and are best friends, although she is very rich and he is very poor (he can’t even afford to move out). When she suggests that they have a baby together, he feels the same pressures that Jeff is experiencing. For both these men, the desire of women to have a baby results in emotional, financial and existential pressure. And the women aren’t happy either. Both Serena and Bridget are conflicted — they want to be pregnant, but can they take the stresses of assisted fertility?

This bare plot summary does scarce justice to the complexity of Kennedy’s vision, which is both politically passionate and theatrically ambitious. Its politics are a wide-ranging attack on the whole fertility biz, which makes gigantic profits out of the misery of countless couples, who are so often given false hope. But, hey, who cares as long as the company shareholders are happy? Theatrically, Kennedy tells this story of two couples with songs, dance and a wild mix of straight, highly emotional dialogues and weird and wonderful satire. At one point, Karl Marx comes on to explain the capitalist exploitation of human bodies; at another, God (Enfield again) speaks to Abraham and blesses his barren and aged wife Sarah with a child (a hilarious Monty Python-esque scene). Then there’s an appearance by Susan Sontag. Does this make for a good play? No, but some moments are fun. Kind of.

The problem with Genesis Inc is that both the politics and the theatricality suffocate the more human, if rather sad, stories of the two main couples. It’s really hard to feel empathetic with Serena or Bridget when the lights are flashing, the IVF crew are disco dancing in 1970s Glam Rock gear, or when Serena’s Asian Mum, a wonderfully scene-stealing character, arrives to give some good advice. Fantasy sequences have Serena’s womb and other organs speaking (voiced by Jenni Murray) and there are dozens of jokes at the expense of alternative health and wellness therapies. In one crazy scene, Miles becomes a sperm donor, and his doubts surface as he masturbates in the clinic. It’s funny, but somehow the humanity of the situation has been left behind in the corridor.

Likewise, the play’s politics are hammered home once, twice and then three times. So while I agree with Kennedy’s analysis of the havoc caused by the privatisation of health services, I really don’t need to hear these lectures about the evils of the free market. Also unnecessary are the subplots involving Bridget’s gloriously foulmouthed boss, social-worker Jeff’s oddly sympathetic client Sharon, and Marshall’s assistant Kiki. The exchanges occasionally sparkle, and sometimes fizz, but there is much too much going on. And some of the writing is clunky. All of this uses up stage time and the show runs for two hours and 45 minutes. So while individual scenes are either moving or entertaining, and some are gloriously comic, the general effect is messy and unfocused. You get the feeling that the show doesn’t really know what it wants to be: human drama, documentary, political tract, musical? By the end, you just wish someone had edited it, and vigorously.

Laurie Sansom’s lively and unpredictable production has an awkward set by Jess Curtis, and the cast of nine play several roles each (and boy, there are many, many roles). Enfield, of course, is a great comedy actor, but he’s not really suited to characters who are even half serious: it always feels as if he is sending up his role. Which is not a comfortable watch. As well as the motorbike-riding Marshall, he plays Marx and God — which will make his fans smile. The main emotional weight is borne by Ritu Arya (Serena) and Oliver Alvin-Wilson (Jeff), Laura Howard (Bridget) and Arthur Darvill (Miles), who also plays piano and sings. The other actors contribute some cartoon figures. Despite some enjoyable scenes, this is more of a comedy revue than a compelling drama. And just proves that we really don’t need another play on this subject.