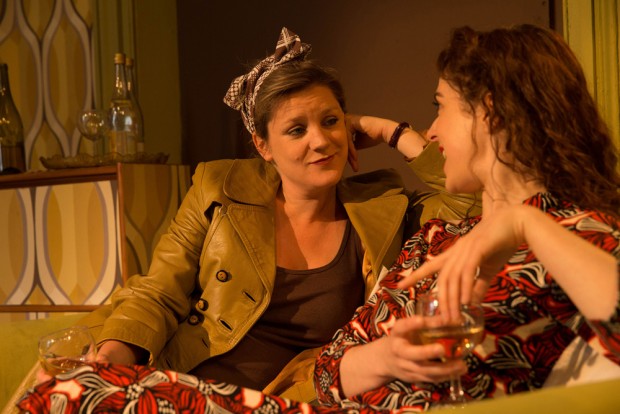 Some plays have such historic significance that it is surprising that they are not revived more often. I blame the obsession with novelty that characterises our culture. So it’s great to see this venue, under its ever-enterprising supremo Neil McPherson, stepping up to the plate yet again and giving us the late Pam Gems’s 1976 feminist classic, Dusa, Fish, Stas and Vi, a play that is more often found hidden in the history books than out in the open on stage.

This is a flatshare drama, and it’s very much a character piece. We are in the London apartment of Fish, an upper-crust femintern activist who is obsessed with a man, the militant lefty Alan. Equally emotional is Dusa, a well-bred ex-Royal College artist engaged in a bitter custody battle with her hubbie, who has snatched her two kids. Much cooler, emotionally speaking, are Stas, a physiotherapist who also makes money as a sex worker, and Vi, a spaced out anorexic young punk. In the hothouse atmosphere of their tiny flat, the four strands of their lives wind and unwind. Although the women are very different, they form temporary alliances. In terms of class, Fish and Dusa have a lot in common, and Stas and Vi share a working-class common sense. In terms of competence, Fish and Stas seem able to manage their lives, while Dusa and Vi totter on the edge of emotional meltdown.

This quartet of characters has a beguiling music of its own, although Helen Eastman’s production doesn’t quite catch its elusive rhythm. But the set pieces — such as Fish’s intelligently rousing speech about the 1910s revolutionary Rosa Luxemburg — work well enough. Although this is known as a feminist classic, Gems spares us the earnest discussions of how the personal is political, and the enjoyable script is as acidic as the white wine the women quaff.

Dusa, Fish, Stas and Vi is primarily a study of female friendship, free of sentimentality or hectoring, and it offers its insights with wit and economy. The piece’s clear-eyed attitudes come at you in their best rags, like the women in one of the brightest scenes when they toast the Bitch Goddess, having dressed themselves up in a wardrobe of colourful garb. The writing is spiky, contrary, funny, militant, quirky, depressing and exhilarating. It throbs with real life, and ends on a provocative cry of pain.

Originally staged in Edinburgh in 1976 under the title Dead Fish, this revival has been programmed to commemorate the centenary year of the death of the suffragette Emily Wilding Davison, who threw herself in front of the king’s horse at the Epsom Derby. Whether there is any real connection between this suicidal act and the play’s politics is material for discussion after you leave the show. It’s so great to see this play on the stage, where it belongs, and not confined to the drama history books.