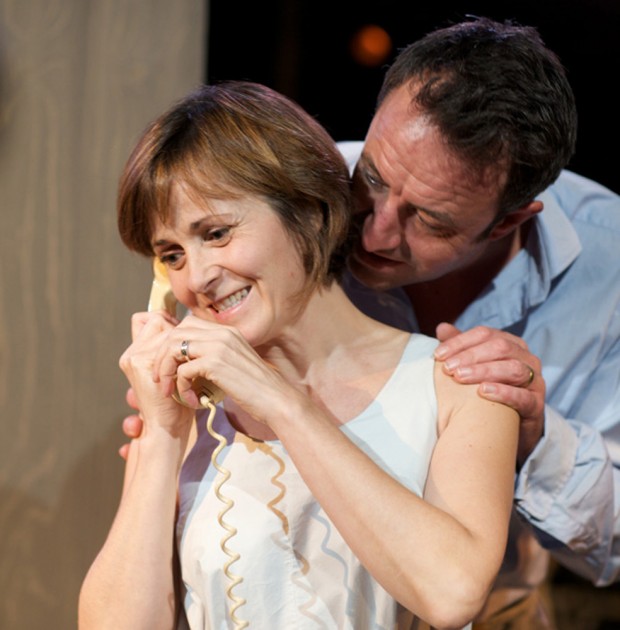 Adultery has had a good press recently. Websites such as meet-to-cheat.com, illicitencounters.com and lovinglinks.co.uk have been in the news, and statistics suggest that more of us are being unfaithful than ever before. But although adultery is a staple of farce and mainstream drama, there are few plays that deal with the subject with quite the unsettling ambiguity and disturbing depth that characterise Martin Crimp’s modernistic play, first performed in 2000 and now beautifully revived by the up-and-coming Amelia Nicholson.

Crimp’s love triangle is composed of a fortysomething couple, Richard and Corinne, plus Rebecca, a young American. Richard is a GP, who has moved with his wife and their children to the country in search of the simpler life. One night he comes home, with an unconscious woman in his arms. Gradually, it emerges that he is a recovering addict and that the woman, Rebecca, whom he claims to have found collapsed on a rural roadside, is more intimately connected to him than he’s willing to admit.

As in his The Misanthrope, Crimp constructs the play with impressive intelligence, staging it as a series of encounters between two characters; first Richard and Corinne, then Rebecca and Corinne, then Rebecca and Richard. Their dialogues constantly slip from the certain into the questionable, so we’re never exactly sure what is happening, and who has done what to whom. But over the whole play there’s a distinct feeling of bad faith and guilty conscience as Richard tries to worm himself out of the mess of his own making. For him, truth is a foreign country.

Conversations between each pair are constantly disturbed by telephone calls, chiefly from Richard’s boss, Morris, who wants to know why he’s failed to visit a seriously sick patient. These interruptions from the outside world not only push the plot forward, they also act as unwelcome visits from a reality which this claustrophobic marriage tries to exclude. All the characters use language as counters in their power games, and as a way of creating the world of their own choosing. Cool, ironic and evocative, the text sings satirically of pastoral myth and compromised suburban marriage.

Nicholson’s production is intense and atmospheric, with a circular stage surrounded by trees and the scent of the forest in Anna Bliss Scully’s lovely design. Although they sometimes slump down on chairs, the actors are more often standing, slowly circling each other, like wary wrestlers about to engage in combat. This gives their verbal duels a sense of palpable menace and suggests a world of primal feelings that lies like a skeleton beneath Crimp’s sparring dialogues.

Amanda Root excels as Corinne, her invincibly confident middle-class manner immediately at odds with her troubled eyes. Slowly, her exasperation breaks out into barely controlled rage, only to retreat instantly into a determined coldness. Similarly convincing is Simon Thorp’s slightly sleazy Richard, who innocently raises his eyebrows while clearly radiating guilt. As Rebecca, Naomi Wattis is given to languid drawls and provocative purrs. If there’s any cream to be had, this cat will get it.

With its intriguing mix of cruelty and lyricism, its word games and its sudden insights, and its portrait of male falseness balanced by its account of female trust and emotional directness, The Country is a superb play in a well-staged revival. And you don’t have to be an adulterer to enjoy it.

This review first appeared on The Arts Desk, 30 September 2010