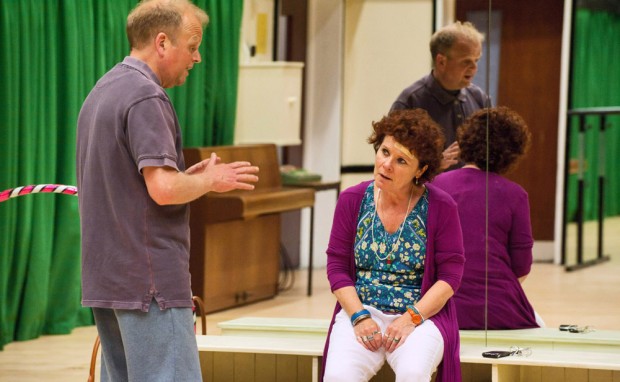 With site-specific shows it’s a natural urge to start by reviewing the location. And I’m not strong enough to resist this temptation. So here goes. This new piece by American playwright Annie Baker takes place at the Rose Lipman building in Haggerston, north London. This is a community centre, and first impressions are not encouraging: duck-egg blue walls, dirty windows, faded carpet squares, discoloured ceiling tiles, encrusted neon strips, cluttered notice boards. If you feel depressed, don’t go to this place.

But, as the play begins, you soon realise that this community centre, designed by Chloe Lamford, is a perfect setting. In a large rehearsal room, a tiny group of five people come together in a quest for truth and reality. Marty (Imelda Staunton), a fiftysomething babyboomer, runs the drama group. Her husband James (Danny Webb), an ex-hippy and lecturer, is one of the participants, and the other three are Schultz, Theresa and Lauren. The place is Shirley, Vermont. Schultz is a fortysomething craftsman, who has just separated from his wife; Theresa is a thirtysomething who is running away from her life in New York, and Lauren is a local 16-year-old. This disparate group are all lonely individuals, and their motives for doing the course come in various shades of a need to connect.

Over the course of six weeks, Marty leads them through the type of exercises that will be familiar to anyone who has done a drama workshop. One is lying on the floor and counting to 10, which proves surprisingly difficult. Another is getting a member of the group to introduce your life story, which is a good device in that it tells us the audience a lot about two characters simultaneously. The title of the play refers to an exercise in which the participants mime each other’s actions, first mirroring them and then changing them. Other exercises involve different kinds of role play. At first this all seems to be having a good effect on the participants, despite some excruciating moments of awkwardness. One pair start dating, then have sex. The shyest character begins to blossom. Marty and James communicate with knowing looks. But the search for truth also unleashes desires that the participants might not have known that they have.

Conflict arises. Relationships come under strain. Things start to get dangerous, and the climax is a truth game that exposes the secrets of two of the characters in particular. An ugly feeling grows as we realise that Marty is not completely in control of the course, and that almost anything might be about to happen. This sense of precariousness is utterly believable and feels psychologically just right. You feel as if a Pandora’s box has not just been opened, but is in danger of being kicked right across the room.

Baker writes with a commendable restraint and you can see why Circle Mirror Transformation won the 2010 Obie Award for Best New Play and was voted one of the top 10 plays of 2009 by the New York Times, Time Out and The New Yorker. Like much contemporary American playwriting, it sometimes feels a bit too polite for its own good, but this is excusable. The way that a complete picture of each of the characters is built up is stunningly accurate. A little room sucks in the whole world.

James Macdonald’s superb production respects the pauses and uncertainties of the text, and the rapid blackouts help push the story forward. His actors respond with some of the most detailed and convincing performances that you are ever likely to see. Staunton and Webb simply take your breath away with their total commitment to their roles, and equally memorable are Fenella Woolgar as the passionate Theresa, Toby Jones as the troubled Schultz and Shannon Tarbet as the repressed Lauren. If the play is deliberately small scale and often consciously undramatic, it still lingers long in the mind. Well worth the trek to Haggerston.