Botticelli in the Fire, Hampstead Theatre 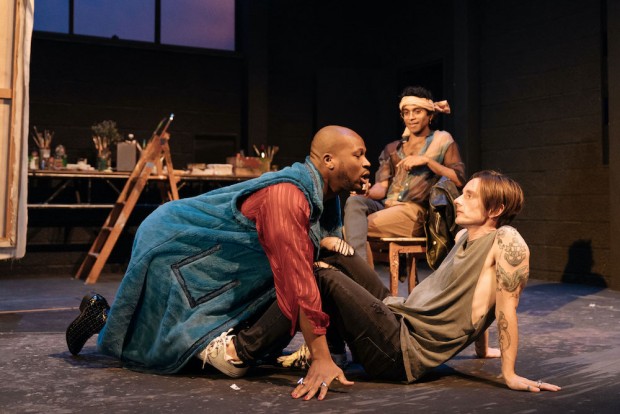 Botticelli is a household name, but who knows the true story behind his most famous painting? The painter’s 1480s masterpiece, The Birth of Venus, is one of the most striking images of Renaissance Florence — and has achieved iconic status. Because it has been minutely dissected by generations of art historians, it takes a bold playwright to smash through the scholarship and give a memorably fresh, in not necessarily accurate, account of its commissioning. Enter Jordan Tannahill, the Canadian polymath whose work spans theatre, film, dance, novels and just about everything else. And he’s still only 31. Now the Hampstead Theatre, under its horizon-expanding new artistic director Roxana Silbert, welcomes him with open arms.

Tannahill is a vivid writer, and he takes a hammer to marmoreal myths about 15th-century Florence. Instead of the usual bland history play, he offers an exciting mash-up of ancient and contemporary, peopling his show with outrageously polysexual individuals who sport mobile phones and travel by car. It’s as much Uber as Uffizi. More RuPaul than Raphael. But first some history: the city, ruled by Lorenzo de’ Medici, patron of artists Sandro Botticelli, Michelangelo and Leonardo da Vinci, has been convulsed by plague and the arrival of Savonarola, a puritanical preacher who is determined to rid the place of sexual immorality. On these bare facts, Tannahill joyfully builds an example of the queering of history, aimed at giving a voice to the silenced and overturning heteronormative accounts of the past.

In the context of this political gesture, which is supported by some intriguing research in the programme about the prevalence of sodomy and male sexual relations in Renaissance Florence, the plot is quite straightforward. Botticelli is commissioned by Lorenzo to paint a picture in which his wife, Clarice, poses as Venus, the goddess of love. Artist and model have an affair, although Bott’s heart is with his pupil Leonardo, and a coterie of pleasure-seekers including his old mate Poggio. All is fun and games with these queer sexual outlaws until Lorenzo is pressurised by the populist rhetoric of Savonarola. Then he decides to find out what Botticelli is really up to, and when he does he gives him a stark ethical choice. At knife point.

Tannahill has a fresh, gloriously abrasive voice that rasps out its satire, delights in its preening poses and glories in its own vulgarities. The tone is set by the opening minutes as Botticelli introduces himself, swearing freely and insisting that he won’t be sticking around to sign “calendars of my paintings” in the venue’s lobby after the show, while Clarice comments about the fact that he has a “huge”, significant pause, “talent”, and Poggio claims he is “the most voracious bottom in Florence”. Even his mother reveals that she caught him “fondling himself in his crib”. Okay, we perceive, so the show is going to have sex, sex, sex. And it does.

There’s a lot of nudity and fucking, onstage and off, but amid the fizzing fun there’s also a serious point. In every historical epoch, argues Tannahill, it’s difficult to be sure whether the winners will be the liberal elite or the populist masses. Who can tell? In this case, the puritanical Savonarola gets a huge following from the working people of the city, who respond positively to his moralistic preaching, and his desire to burn both vanities and sinners in one big bonfire. This threatens the liberal elites and the coteries, whose amoral hedonism is all about pleasure not prayer. Any parallels between then and now are clearly deliberate.

The colourful text gets a hugely sympathetic production from Blanche McIntyre, on a bare, dark, split-level set by James Cotterill. In keeping with the spirit of the piece, there’s a brilliant sequence in which Clarice, surrounded by dancers in gold lamé booty shorts, impersonates Venus to the sound of Britney’s “Work Bitch”. But it’s not all camp paradise; there are also scenes of betrayal and pain. Casting a black actor as Lorenzo and a blonde as Clarice gives one sequence an echo of Othello; in another scenario, Botticelli’s mother washes his beaten body as if this was a Renaissance Pietà. As the plague worsens, cadavers pile up. There’s a great squash court episode; the climactic fire sequence is a blast; the peanut-butter image delightful.

Despite this, the Botticelli character is hard to warm to. Self-styled drag fabulist and cultural looter Dickie Beau plays him as he is written, vain and venomous, with a sneer to die for: long before he tells us that we can’t possibly hate him as much as he hates himself, we’ve got the point. This might be queer history, but, as he says, it is also “another tortured fag-artist sob story”. And, of course, it knows it. If there is something deliciously subversive about featuring unlikable characters centre stage, it’s harder to forgive the fact that the second half of the show loses much of its initial lustre. Meanders a bit. And not everyone will love its arch self-consciousness.

Still, if you can get over this, and make allowances for some self-indulgent writing — the repeated list of Leonardo-style ideal physical proportions can get tedious — you could easily have some good fun with the jokes and this cast: Adetomiwa Edun’s brutal Lorenzo, Sirine Saba’s powerful Clarice, Hiran Abeysekera’s gentle Leonardo and Stefan Adegbola’s outrageous Poggio. And they are ably supported by Howard Ward (Savonarola) and Louise Gold (Madre Maria). At their best, they are both highly entertaining and manage to convey a sense of danger which might inspire glimpses of the corpses of plague victims floating down the Arno, while the elite party on — in sensual isolation.