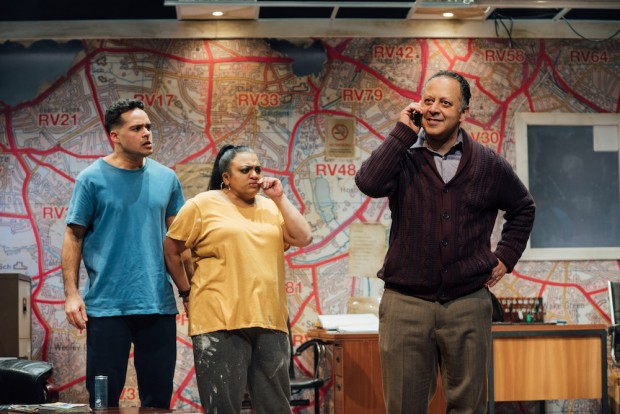 Write what you know, says the adage, and that’s exactly what playwright Ishy Din has done with his new play, Approaching Empty, now at the Kiln in Kilburn. The middle-aged Middlesbrough-born writer, who has had a handful of casual jobs (retail, warehouse, office), and also tried his hand at managing a restaurant, a furniture store and a video shop, spent much of his working life as an occasional cab driver. So it’s not altogether surprising that his latest is set in a cab office in Middlesbrough, and that it’s about a group of middle-aged Asian friends.

Starting in April 2013, symbolically on the day when Margaret Thatcher died, the play takes place in the rather shabby surroundings of King’s Cars, a minicab firm which, judging by the lack of ringing phones, is on its last legs. Its manager, Mansha, and its owner, Raf, are fiftysomething Asian men who have been best friends for decades, despite being complete opposites. Raf is a Thatcherite entrepreneur, red in tooth and claw, while Mansha is a big softy, a lefty plodder who is depressed at having wasted his life. If Raf is a shark, Mansha is a goldfish.

When Raf tells Mansha that Munir — head of the rival, and much more successful, Fleet car company — is interested in buying up Raf’s business for the huge sum of £120,000, Mansha throws off a lifetime of caution and makes a rival bid. He wants to make some money for a change; he wants to really be someone. From the start, this is clearly a bad move, and one that strains our credulity, but things get even worse when he persuades his son-in-law, Sully, to invest his money in this enterprise, and Sully persuades Sameena — an ex-offender longing to go straight for the sake of her estranged kids — to do the same. Also affected is Shazad, Raf’s son and a student on vacation.

Predictably enough, and this is a sadly predictable story, things soon start to go wrong. Very wrong. But although we would like to sympathise with Mansha, one of life’s failures, his sheer folly makes that difficult. And he doesn’t even have the excuse of youthful naivety that could in some measure exonerate Sully and Sameena. Yet the main trouble with this play is that, like so many work plays, it is stuck in an office where, quite frankly, very little happens. This gives the piece a static feel that it never really shakes off, with the gloom being only occasionally lit up by two vivid characters: Raf, whose vigorous Thatcherism has a grotesque appeal, and Sameena, whose lippy feistiness is a sheer delight. Sadly, however, this is not their story. I wish it was.

While things liven up a bit towards the end, with the arrival of Sameena’s brother Tany, a young bad-boy gangster, in a scene which radiates a savage ferocity, the play ends up as a banal morality tale, complete with finger-wagging didacticism of the most annoying kind. Along the way, Mansha gets a couple of moments to express his nostalgia for the male camaraderie of the local steel works where he was once employed, and Raf points out the importance of community to British Asians, but the effects of 1980s economics remain in the background, despite the fact that the onstage television, whose volume rises between the scenes, is there to helpfully tell us that capitalism is bad and the world is unjust.

This co-production with Tamasha and Live Theatre, directed by Pooja Ghai and designed by Rose Maggiore, can’t make up for the deficiencies of Din’s writing and storytelling, although it is good to hear the northern accents of what are sometimes seen as forgotten communities. The acting has integrity and commitment, with Kammy Darweish’s rather pathetic Mansha nicely contrasted with Nicholas Khan’s incisive Raf. Karan Gill (Shazad), Nicholas Prasad (Sully) and Maanuv Thiara (Tany) are all similarly good, while Rina Fatania (Sameena) has a thrilling energy and stage presence. Despite some good discussions of the difference between ruthlessness and responsibility, Approaching Empty is more of an old banger than a sleek Uber machine. Sometimes writing what you know is simply not enough.