Home » Reviews » All We Ever Wanted Was Everything, Bush Theatre

All We Ever Wanted Was Everything, Bush Theatre 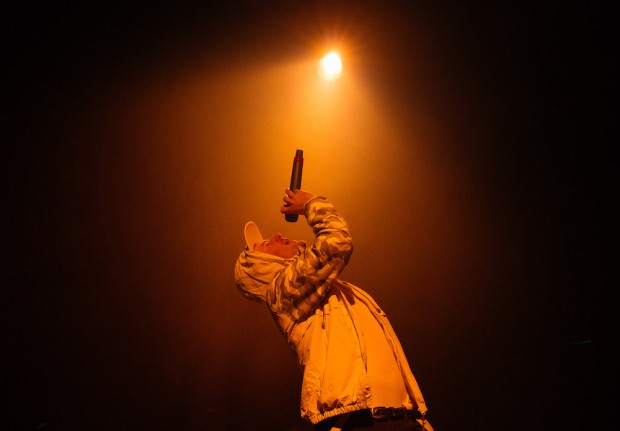 Sometimes, just sometimes, I see a show which makes me wish that all theatre could be like this. A feeling of selfless adoration. Love even. In the past that might have been anything by Tara Arts, Complicite or Frantic Assembly; more recently, this could be anything at the Yard Theatre. Or, to be frank, at the Bush, under Madani Younis’s exciting leadership. Now Luke Barnes’s exhilarating pop opera, All We Ever Wanted Was Everything, performed by Hull-based Middle Child theatre company, is aptly described as “a three-act anthem set across three decades”, and it presses all my buttons: it has music; it has wit; it has verbal attack — and it has true emotional depth.

Set in Hull and spanning some 30 years, the play’s scenes cover Cool Britannia (1997), Broken Britain (2007) and today’s Brexit land (2017). Beginning in 1987, with the birth of Chris and Leah, he the son of a widowed rich mother, she the daughter of a working-class father whose wife has left him, we see both of them grow up as part of the Harry Potter generation. When they meet aged 10, and playfully decide to marry, for a moment it looks like this will be a conventional love story. But class is stronger than desire, and they go their separate ways. Chris is pushed by his mother to imitate his dead dad’s career success, but at university he is stricken with doubt. Leah, whose father works as a bouncer, finds a dead-end job in Hull. At the same time, an asteroid — embodied by a silky voiced woman — is falling through space. It’s on a crash course to destroy our planet. And really, don’t we richly deserve this fate?

Chris and Leah have different life stories, although she does change, getting so fed up with her limited horizons that she takes up a casual offer by Holly (who used to bully her at school), of a high-powered job selling energy in Leeds. Both Chris and Leah have parent trouble, with his mum, Kimberley, exerting tons of pressure on him, and Brian, her dad, being unable to satisfy her expectations of having a good lifestyle. Even though we just know that these two youngsters will meet again, the story keeps us guessing where and when this will happen. Behind these emotional tangles is the echo of “Miracle”, the first song from Matilda the Musical: “My mum says I’m a miracle!” In an age when parents tell their children that they are special and can have everything they want, All We Ever Wanted Was Everything shows how this is so often an empty promise.

This is gig theatre, narrated in a gloriously forceful way by an MC, and performed by the Middle Child’s excellent actor-musicians, with music composed by James Frewer. His tunes lightly parody the music of each decade, with lines such as “Things can only get better” echoing D-Ream’s 1997 New Labour anthem, while other passages are reminiscent of the Kooks, Britpop, contemporary dance music and indie sounds. The result is like a bravura mix of Willy Russell’s Blood Brothers, Richard O’Brien’s Rocky Horror Show and even a dash of David Bowie’s Ziggy Stardust fantasies. Strutting his stuff across the stage, often right in your face, is MC Marc Graham, eyes glittering behind their kohl, energizing the audience with an attitude that is part banter, part provocation.

Apart from the electric MC, this is a play with no hero: everyone, every character, is unhappy, and each is unhappy in their own way. What Barnes seems to be saying is that the emptiness of their experience reflects the emptiness of contemporary consumer capitalism. Today’s lifestyles suck up all of our most human qualities into a black hole, leaving us shells of blankness, empty of true feeling and stressed out by superficial trivia. Alienation. If this is a story about lost opportunities as well as about dreaming of a better tomorrow, Barnes balances pessimism and political criticism with a heartfelt sense that only love and compassion can heal social division and widespread despair. For young people, a show like this could be a call to arms: change the future. If you don’t we are doomed. Remember that asteroid? It’s still on its way.

All We Ever Wanted Was Everything is exemplary not only in its thrilling use of actor-musicians, who swap instruments and perform with an exciting stomp and fluent tingle, but also in its rootedness in locality. Partly funded by Hull City Council, when it was a highly successful UK City of Culture in 2017, the show has toured, often with the help of Paines Plough Roundabout Theatre, to places such as the Edinburgh Festival two years running. It has played clubs as well festivals, and the text makes a number of local references, to the football club and Hull’s Build-a-Bear craze for example, that must have gone down a storm when the show was performed in that city.

This fusion of play text, music, narration and dialogue is pushy, punchy and poetic, well directed by Paul Smith and designed by Bethany Wells. Graham leads the cast, with the stage presence of a punk rock performer, while James Stayner’s Chris grows into his very own crisis of masculinity and Bryony Davies’s Leah discovers an ambition that turns to ashes. Emma Bright’s Kimberley and Joshua Meredith’s Brian are both great performers and fab actors. Alice Beaumont plays both Holly and the asteroid. At the end, the head banging MC shouts at the audience, “Live your life, I dare you!” a viscerally electrifying moment. As I leave the auditorium, to the sound of David Bowie’s “Five Years”, for one lovely moment I suddenly wish that all theatre could be so good. So real good.