A Profoundly Affectionate, Passionate Devotion to Someone (–noun), Royal Court 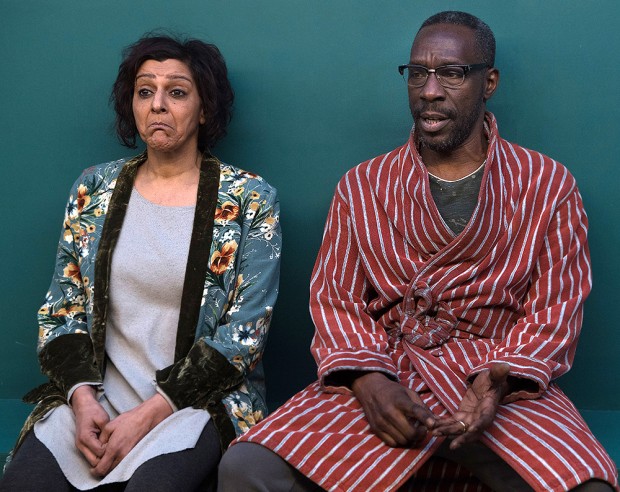 Love, we know, will tear us apart again. And again. And yet again. It will shred our nerves and rip through our guts; it will fill us with anguish, and then douse us in regrets. It will expose our weaknesses, and then make us say what we can never again unsay. It will embattle our egos, and then stamp on our ids. It will. It really will. And before you ask why the bedroom is so cold, I can tell you that all this is the effect of some passages of debbie tucker green’s new play, which will henceforth be known as the one with the long-dictionary-definition title, and which has national treasure Meera Syal in the cast.

The first thing you notice about it is the staging, in the Royal Court’s upstairs studio: the centre of the room is full of low black bar stools, which are hard and uncomfortable. Around three walls is a green platform, with a handful of seats, but no props. As they wait for the audience to file in, the actors draw circles and lines in chalk on the walls. Then two of them, a couple called A and B, start. In 14 short scenes they argue, full of recrimination and resentment, about their relationship. Time flips back and forth so some scenes show different emotions, most notably their joy in their newborn kids. And their rapport goes beyond the grave.

Then, in part two, another, older couple, Man and Woman, have a similar stand-off. They are in their dressing gowns, which suggests both domesticity and illness. She is very sick, but their mutual recriminations and renewed resentments swallow up their energies. The final part sees Man having an affair with Young Woman, who happens to be the daughter of A and B. In each of these three encounters, apologies are demanded, memories are twisted and a struggle for power strides up and down the playing space.

As you’d expect with love, the central issue is communication. The 80-minute piece is about what we say, and what we don’t say. About how we listen, or don’t. It’s about our need to be heard, and our unwillingness to hear. It’s about what we love about the other person, and what we’d like to change in them. If only we could. The cumulative effect is a kind of Sartrean feeling that hell is indeed other people. But without the philosophy. There’s an unspoken implication that every relationship is the same, that every love sinks in the same old shit.

Green’s couples have the same highs and the same lows (mainly lows). The same emotional tangles and the same disappointments. The same exhaustion (greatly aided by the discomfort of the seating) and the same silences. The dialogues are tentative, bitty, repetitive, reiterative and rebarbative. I did like the repetition of a scene about the boredom of having sex with one person, once with the man being bored and then with the woman feeling the same. In general, the women are suspicious and the men are evasive. Since they talk about nothing but themselves the piece has the infernal intensity of complete solipsism. Despite green’s ability to write dialogue that is pointed and perceptive, I quickly got tired of going around in circles. And circles. And more circles. I longed for her characters to talk about something else: they never do.

As directed by green herself, the play — however passionately felt — quickly gets tedious. In the first and longest part, Lashana Lynch (A) and Gershwyn Eustache Jnr (B) brilliantly portray a couple whose familiar wrangles, about talking and about sex, fit into a broader narrative of their lives. In the next two parts, the brevity of the exchanges between Man (Gary Beadle), Woman (Syal) and Young Woman (Shvorne Marks) means that the actors don’t have much to really challenge them, and the other components of the production — from designer Merle Hensel to Christopher Shutt’s sound — are not exactly straining either. Syal manages to coax the maximum expressiveness from her lines, punctuating the exchanges with grimaces until she finally cracks, and looks like a little girl lost. But although the play has its moving moments as well as its insightful ones, it is too static — it fatally lacks a really satisfying story. It is the victory of the abstract over the dramatic.