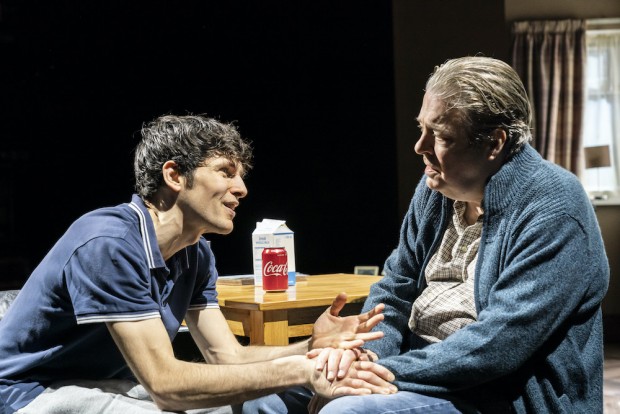 Genetic engineering is in the news again. The occasion is the resignation of Andrew Sabisky as special adviser to Boris Johnson after a twitter storm about his comments on race and intelligence: basically, black people are less intelligent than whites. Nice guy. Another of his internet posting from 2014 suggested the government could “legally enforce universal uptake of long-term contraception at the onset of puberty” to help prevent a “permanent underclass”. At the same time, Johnson’s advisor Dominic Cummings is reported as saying that the NHS should help fund genetic selectivity. It’s the return of eugenics into mainstream discourse — the desire to tamper with genes in order to “cleanse” society. In this context, a revival of Caryl Churchill’s 2002 play, A Number, feels particularly timely.

The story is more about family than science. With Churchill’s typical intelligence, it explores the situation that develops after Salter, a father now in his sixties, meets three of his sons (two of them being clones of the original). At first, he is visited by the troubled thirtysomething Bernard, and it is deliberately unclear which of the sons the young man actually is. Then it quickly emerges that although Slater wanted a clone of his original son, who he put into care at the age of four after failing as parent, the doctors have actually cloned a much larger number — about 20 — and that these individuals are alive with no knowledge of each other or of their biological parentage. The tensions rise as the first Bernard, angry at his treatment as a child, expresses his feelings to Salter in no uncertain terms. Things get even more explosive when the two Bernards meet.

At the end of this brief drama, which lasts barely one hour, Salter is visited by Michael, a clone who has no resentment and no interest in his genetic past. He works as a maths teacher and is married with three kids. His happiness and simplicity contrasts strongly with the confused feelings of the two Bernards, and now it is Salter who struggles to understand how this “son” could be so different from his clones. He asks him to tell him something special, something unique, about himself, but Michael cannot say anything that is out of the ordinary, or even specific. With this gesture, Churchill turns the focus onto the audience: how does Salter’s question apply to us? What, in our genes or in our upbringing, makes us singular, individual, unique even?

The idea of clones, that there might be twins of ourselves living in society, people we could bump into, or spot in the distance, is disturbing to any idea of the uniqueness of our selfhood. It also reminds us of cultural myths about doppelgängers, doubles whose appearance foreshadows death. If Salter is the father of some 20 men, are they all the same? They might look very similar, but what are they like as people? How would it feel to meet several grown-up versions of your own son? Apart from these questions, the emotional core of the play is the promise of getting a second chance in life; and many of us might be tempted to have a second go at parenthood. Or, as kids, a second chance at playing the cards that nature has dealt us. But the subtle subtext of the story implies that duplication can have catastrophic effects on our subjectivity.

Polly Findlay’s production, like Lyndsey Turner’s revival of Far Away currently at the Donmar Warehouse, is markedly more naturalistic than the original Royal Court staging. Gone are the abstract elements, just as the new Far Away is less a fairy tale than a real story. Both productions share the same designer, Lizzie Clachan, and she gives Salter’s home, where all the scenes are set, a rather mundane and ragged suburban normality that contrasts well with the moral enormity of the play’s implications. Each episode is seen from a different angle, mirroring the story’s revelations, and Findlay gets excellent performances from Roger Allam as Salter and Colin Morgan as his children.

Allam is bemused and bruised, moving around the set like a battered old buffer who feels guilty at his past failings and at first is evidently unable to grasp the magnitude and significance of a decision he has made many years ago. In his desire to start again as a father, he has begun a process he doesn’t entirely understand. He conveys a good sense of a man who is both evasive and likely to explode at any time. In his three incarnations of the same genes, Morgan — familiar from his starring role in the television series Merlin —demonstrates his versatility. At first he is a picture of hurt, then of fury, and finally of well-centered happiness. Yes, this character implies, it’s all about nurture rather than nature. If this intimate play feels a bit lost in the vast space of the Bridge, the performances are big enough to give it the required punch.