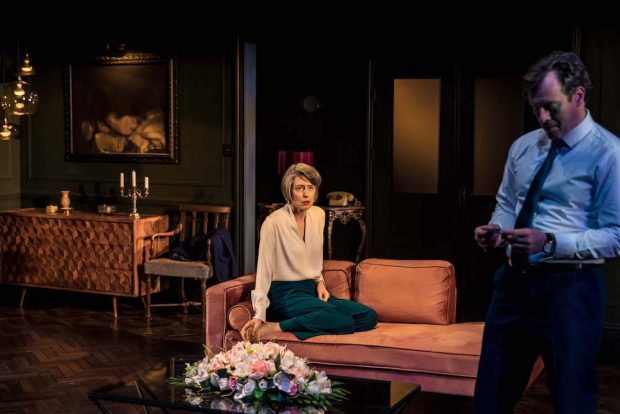 Let’s start with stereotypes: British theatre is naturalistic, down-to-earth and explains everything clearly to the audience; Continental drama is absurdist, abstract and suggests rather than shows reality. It’s a different sensibility. A different way of seeing. Okay, now you are ready for French playwright Florian Zeller’s latest, The Forest, which has its world premiere in Christopher Hampton’s translation at this north London venue. It’s a brilliant example of a post-dramatic play, and its excellent star cast is led by Toby Stephens and Gina McKee.

In a comfortable upper-middle home, Pierre (also called Man 1 and played by Stephens) arrives home from his work as a distinguished surgeon at his private clinic to greet his wife Laurence (McKee). She is distressed because their distraught daughter has just discovered that her husband has been having an affair for many months. And she can’t, no matter how persuasive Pierre tries to be, accept this adultery. No, she never wants to see him ever again. This cool, but emotive opening raises the question: why is Pierre reacting so calmly to the discovery of this betrayal? And the first scene is followed by one which shows Man 2 in bed with Sophie, a young woman with whom he is having an affair. We might assume that this is Pierre’s son-in-law, but is it?

Zeller simply and rather beautifully evokes the clichés of all stories about adultery. The husband is bored and needs an adventure, the wife is innocent, but then discovers the truth. The other woman rapidly tires of being a mistress and wants to be in a regular relationship. So, what to do? Should the husband tell his wife? Should the other woman end the affair? Should the husband leave his wife and family? Even at the risk of damaging his career? And would you murder your mistress if she became a real threat to your marriage? In this play, the search for truth leads to the philosophical conclusion that reality depends on your point of view.

It’s as if the play has taken a deep draught of post-structuralism, mixed with eerie symbolism: one character is called The Man in Black, a sinister figure with a deadly pale face who behaves like a cop, a psychiatrist and a malevolent spirit. It is he who tells Pierre a folk tale about a prince who becomes lost in a forest while hunting down a stag. Finally, now utterly alone, the prince wonders whether the stag ever existed. Which encourages us to believe that erotic desire for men involves chasing the illusion of a perfect lover, while ignoring the real women around us. Mothers, wives and daughters don’t matter: it is the elusive object of desire that signals from the shrubbery — and we are so easily lost.

Only death finishes the chase, and here a bouquet of flowers — you know, the kind you see on coffins — appears from the start on Pierre’s living room table, while another later arrives with condolences. Perhaps Pierre has died, or perhaps Sophie has been murdered, perhaps killed by Pierre, or by his son-in-law, or by his wife. Zeller masterfully subverts the thriller genre, using not only tropes such as accidentally discovered letters and mysterious phone calls, but also the sense of a masculine conspiracy to silence troublesome females. He does this by replaying some of the scenes in different variations, with different outcomes, suggestive of the way our memories can obsessively go over the past, rewinding and recreating it in our fantasies.

In The Forest, ambiguity is the key. We might be watching the story of Pierre’s descent into guilt and confession, or his suicidal exit from the pressures of home and extra-marital love. Or we might be watching two stories, that of Pierre and that of his son-in-law; perhaps they even share the same mistress. Perhaps not. It’s a wonderful puzzle of a piece, and after 80 minutes you can leave the theatre and recreate these multiple scenarios with wonder at the playwright’s skill in keeping open so many possibilities. A fine sense of mystery and a disturbing wobble in our centre of gravity. Each scene suggests a different interpretation is possible, and a desolate feeling that you are most alone when you are in marriage, or in a love affair. Yes, the central theme is existential solitude.

As Pierre obsessively recalls his own past, or falls down the rabbithole of his own mind, Jonathan Kent’s production exerts a compelling fascination. Stephens and Paul McGann portray either two people, or two sides of the protagonist with a control that is as impressive as it is slightly disorienting. What, really, is Pierre’s truth? Perhaps neither we, nor McKee as his elegantly perceptive wife, will never find out. Stephens’s performance is good at suggesting the escalating anxiety, at first mild and then barely controllable, that engulfs his character, while McGann remains quietly and impassively in full control. McKee, meanwhile, calmly nurses suspicions, scrutinizes her husband and has a more grounded emotional intelligence.

On designer Anna Fleischle’s set, which comprises three boxed rooms — living room, bedroom and office — the situation develops as a kind of claustrophobic nightmare, with a nod to Banquo’s appearance in Macbeth’s banqueting scene and a painting whose image changes like that of Dorian Gray, as Angel Coulby’s Sophie comes to a sticky end. Unnerving Finbar Lynch gives a mildly Mephisto shade to The Man in Black, a portent perhaps of death, as the funereal flowers pile up. Together, all of these elements add up to a strong sense of intrigue and mystery, angst and pain. Nothing is as it seems.

In a theatre culture where naturalism is boss it’s an act of bravery to stage a piece which has such virtuoso qualities of deliberately denying easy answers, or emotionally satisfying payoffs, and instead prefers to suggest some of darkness and aloneness that exists in the hearts of both men and women. Zeller’s superbly anti-naturalistic play certainly does avoid spoon-feeding the audience and, in the best traditions of Continental theatre, intelligently reminds that we have to put in some thought. For those who do, this is a rich text which resonates deep in the subconscious. In the thickets of the mind.