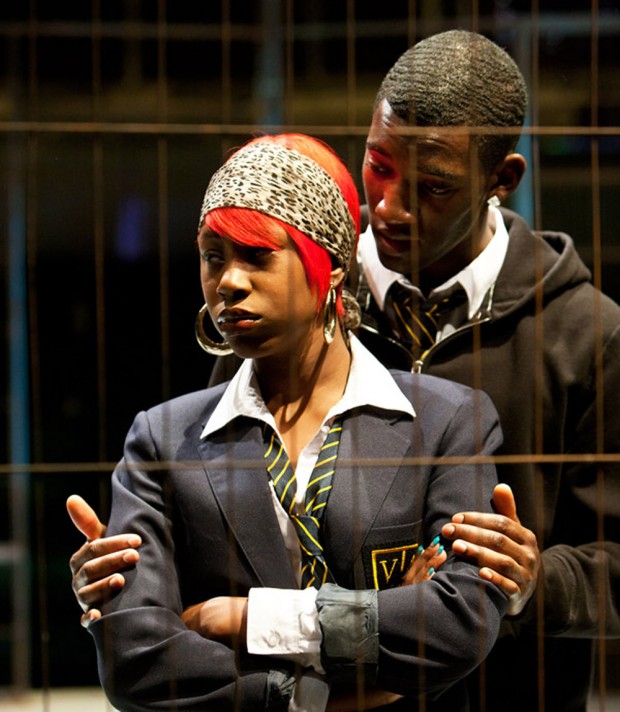 Recently, some British playwrights have gone back to school, and found that it feels very much like a war zone. All the old tensions between teachers and pupils have escalated into open conflict: knives are drawn, punches thrown and arguments are settled by fights. Likewise, the language is disrespectful at best, and always expletive-heavy. Vivienne Franzmann’s new play, which visits London after opening in Manchester last month, frankly refers to a war zone in its title, and its action is scarcely less antagonistic.

Like John Donnelly’s The Knowledge and Steve Waters’s Little Platoons, Mogadishu portrays the current state education system as a violent and racist training ground for life. It starts with a playground fracas in which Jason, a black 15-year-old, pushes Amanda, a white teacher, to the ground. When she reluctantly reports him to the head, Chris, Jason accuses her of racism — and bullies his peers into backing up his story. He even gets help from Ben, his father. To the dismay of Amanda, and of her young daughter Becky, and of her black husband Peter, it is she who is disciplined.

The story is told with a strong taste for irony. At first, Amanda wants to protect Jason — she sees this angry young lad as a troubled youth, not as a thug. But Peter knows better: in one of several passionate exchanges in the play, he lashes out at her middle-class liberal sensibilities. Similarly, Becky, who goes to the same school, knows much more about Jason and his bad-boy crew than her mother. Ironically, Ben’s stout defence of his son turns out to be the catalyst for the tragic climax.

Matthew Dunster’s production, on Tom Scutt’s wire-fenced set, conveys the sense of a world of caged lives. In the conflict between good kids and bad kids, and good teachers and bad kids, each side is equally trapped. Mutual incomprehension prevents the truth from coming out; both adults and children inhabit different planets. It feels like the youngsters — gosh, even the middle-class ones — are out of control, and that violence is the final arbiter.

Mogadishu is joint winner, with Andrew Sheridan’s Winterlong, of the 2008 Bruntwood Prize for playwriting run by Manchester’s Royal Exchange Theatre, and it is a very impressive debut. If it has faults, they are the faults of a first play: a tendency to lose focus, and to squander intensity by succumbing to the desire to have some fun. So while Dunster’s direction keeps up the menacing pressure, and delivers a couple of powerful climaxes, it was disappointing to see that Firat, the Turkish boy, was played mainly for laughs.

The skill of Franzmann’s play lies in its shifting perspectives on Jason, the king of a petty playground gang: in one scene you hate him; the next you admire him; then you suddenly sympathise; then you recoil; then his fate cuts you to the quick. And although he is a bit of a cipher in the first act, Malachi Kirby plays him with impressive, and growing, power and vigour. Similarly, Julia Ford’s Amanda makes the journey from wet liberalism to raging fury with complete conviction. Of the remaining cast members, who are all vividly memorable, Savannah Gordon-Liburd as Dee, Jason’s girlfriend, conveys a real sense of an uneasy conscience. At its best, Mogadishu burns bright as a vivid picture of generational and class war. It is also guaranteed to cure you of any lingering nostalgia for school days.