Guards at the Taj, Bush Theatre 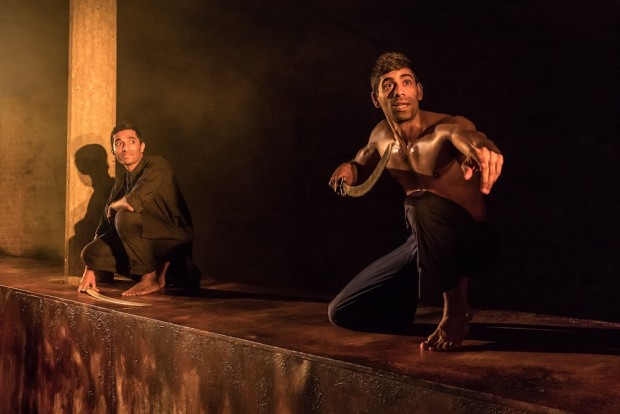 The Bush is back! After a whole year of darkness, the West London new writing venue has reopened its doors following a £4.3million remodeling and refurb, a project close to the heart of its artistic director Madani Younis. Designed by architect Steve Tompkins, and including beautiful ceiling paintings by local artist Antoni Malinowski, the venue looks brilliant, with its new terrace, fully accessible entrance and extra rooms. These include a lovely new rehearsal space, expanded offices and a sedum roof (complete with two black cats). Plus, most significantly, a brand new studio theatre that joins its main space, making this a veritable powerhouse.

For its reopening, Younis has looked across the pond for a new play. He has chosen Rajiv Joseph’s Guards at the Raj, which was first staged at the Atlantic Theatre, New York, in 2015, picking up an Obie Award along with other plaudits. Now revived in a taut production by wonderboy Jamie Lloyd, the play raises some interesting ideas. It is a two-hander set in Agra, India, in 1648. We meet a pair of friends, Humayun and Babur, who work as Imperial guards, protecting the enclosure within which thousands of craftsmen and workers are busy completing the Taj Mahal, built by the Mughal emperor Shah Jahan. It has taken 16 years to construct and, as the morning approaches, this wonder of the world is nearly ready.

The two men make a neat contrast. Humayun is the privileged son of the “chief top boss man of the imperial guard”; Babur is from humbler folk. Humayun is serious, disciplined and practical; his best mate is a joker, chatty and a dreamer. The first is worried that his friend’s big mouth will lead to arrest for sedition or blasphemy. As the dawn approaches, the men are tempted to turn and look at the new building, even if this is against the rules. The next day, they have a much more gruesome task: Shah Jahan wants to make sure that no one will ever build a more beautiful building so he orders mutilation of the site’s 20,000 workmen. And guess who has to carry out this ghastly undertaking?

I find myself quite conflicted about this play. I can easily appreciate its clarity and neatness of exposition and construction, and the way in which the bigger themes approach with the same inevitability as the dawn over Agra. Yes, behold the mighty emperor and his delight in creating a fabulous palace, a fitting tomb for his favourite wife, Mumtaz Mahal. Like Coleridge’s Kubla Khan, the creation of beauty is breathtaking. But what is its cost? How wide is the river of blood that that the Taj Mahal has caused? How many poor people have been crushed by this juggernaut? And when Joseph delivers the full horror of the story’s final betrayal, he produces one of the most savage scenes I have ever witnessed. It has all the force of a punch in the face. Horrible.

At the same time, I’m troubled by some of the implications of this history play. By choosing a story about a Muslim ruler, Joseph suggests that religious tyranny can both create beauty and aspires to stamp it out (or so Babur thinks). Although it’s set in the 17th century, there is some contemporary resonance in the fact that the punishment for sedition is so much greater than that for blasphemy. By implication, this is wiser than most Islamic states functioning today. Also, the extreme brutality of the play implies that the Other is always barbaric. But is this really relevant to us? Isn’t it too easy, almost racist, to criticize the Indian rulers of a barbaric past, without really looking at what our own rulers are capable of?

Lloyd’s production, designed by his collaborator Soutra Gilmour, is quite static — there is, after all, only so much you can do with a two-hander about guardsmen. But his actors are excellent: Danny Ashok’s quiet and correct Humayun contrasts nicely with Darren Kuppan’s irreverent and amusing Babur. Amid the horrors of tyranny, there is bleak humour and even some gory slapstick. But somehow I felt very little for these two characters, and their quirky imaginations felt a bit contrived to me. It’s an okay show, but it didn’t feel as essential as the occasion seems to demand. But who says that running a new writing theatre is easy?