Home » Reviews » An Evening with an Immigrant, Bridge Theatre

An Evening with an Immigrant, Bridge Theatre 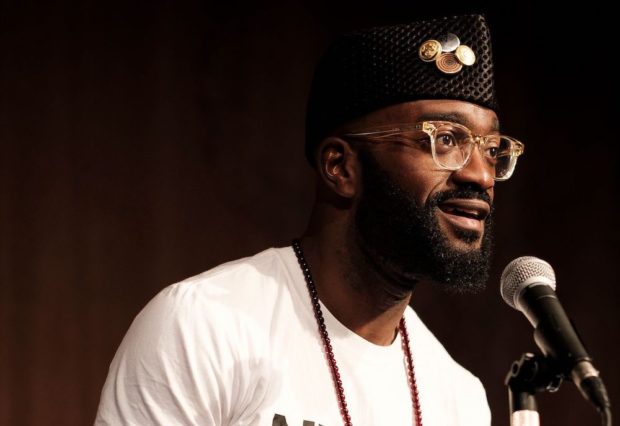 When the history of British theatre’s response to COVID-19 comes to be written, the names of two men will feature prominently: Nicholas Hytner and Nick Starr. The “two Nicks” were the creative force behind the National Theatre’s pioneering NT Live broadcasts, which then dominated the digital streaming landscape during lockdown, and now, as the chiefs of the Bridge Theatre, they have led the move to safe indoor theatre performances. Their season started with Beat the Devil, David Hare’s coronavirus monologue, blossomed out with Alan Bennett’s Talking Heads, and now continues with a coolly delivered revival of Inua Ellams’s An Evening with an Immigrant.

Ellams’s track record — the rapturously energetic Barber Shop Chronicles and the brilliantly reworked Three Sisters — raises the heart rate even more than the risk of venturing into central London during the pandemic. This time, the award-winning poet and playwright revisits his life story, originally documented in The 14th Tale, his autobiographical Fringe First Award-winning one-man show, and takes us on an eye-opening ride through his experiences. He was born in Nigeria to a Muslim father and a Christian mother, in a northern imam-dominated area. When they came under pressure from religious extremists, the family left for England in 1996, moved to Ireland for three years, then returned to London and, despite considerable adversity, Inua began his creative life as a performance poet.

First seen at the Soho Theatre in 2016, An Evening with an Immigrant is a 90-minute show that blends wry reminiscence, personal experience, poetry and music. It starts with a typically offhand comment: “I come from a long line of trouble-makers.” Maybe, but trouble certainly had a knack of finding his family. When they are threatened in Nigeria, and one of his uncles is disappeared, they move to London when Inua was aged 12, and begin the long trek through our immigration system. They apply for leave to remain but their documents are lost in the post, necessitating the move to Dublin, where he was the only black kid in his class. After some horrible racist incidents, including threats from Sinn Fein, they come back to London.

As an account of prejudice, Ellams’s story reminds us that, even in the late 1990s, casual racism was extremely common. In London, he is called a “nig-nog”, among other insults, and Dublin is no better. Worse even. Although he now sees the Irish as “the Nigerians of Europe”, Dublin’s nationalists are as bad as Nigeria’s Islamists. At the same time, these constant uprootings mean that the teenager always has to say goodbye to his friends, and the loneliness of the migrant is a constant refrain. It’s a far cry from being comfortably middle-class in Nigeria.

Back in Britain, the family then have to edure the humiliations and the irrational nightmare of applying for leave to remain. Until the Home Office gives them official permission, Ellams is technically an illegal, and has to be supported by theatre-workers and lawyers while being officially unable to work. Still, he manages to carve out a successful career. At one point, he is invited to Buckingham Palace while being in danger of deportation, and his elegant and typically humorous account of this could be called, by Her Maj, Afternoon Tea with an Immigrant. If you think that his family was finally being charged more than £900 a year each for the right to live and contribute to this septic isle, you can feel the injustice of their situation.

Before one of the “two Nicks” manages to help him, Ellams finds his creative voice through writing. As he points out, you don’t need much equipment to start putting pen to paper. “Poetry saved my life — it’s the cheapest way to be free.” Making use of the UK’s public libraries as a nerdy teen — “I was like a black Matilda,” he quips — he gradually hones his skills as a performer of his own poetry. He has a nice line in self-deprecation, calling his show “very personal, very navel gazing”, although his skill as a raconteur is so polished that there is only one brief moment when, talking about depression, he consciously connects to the emotions of rejection and loneliness. At this point his voice cracks and a stillness descends on the the face-mask-wearing audience.

Produced by Fuel, An Evening with an Immigrant is an extended poetry reading, with some light sounds from DJ Sid Mercutio, which casts the spotlight brightly on Ellams, highlighting his effortless charm, a mixture of pointed anecdotes and chuckles, occasionally spontaneous but for the most part well-worked out and much practised. He is both confident and seductive, eloquent and graceful, radiating joy and provoking sympathetic laughter. Only in the final minute or two does he turn his anger on the horrors of global migration. Before then, with a suitcase by his side to remind us that during this 14-year journey he doesn’t feel at home anywhere, he turns emotion into anecdote and the written word into music. It’s both a great love letter to family and a moving testament of the migrant experience.